Did you "plant" your bulb  from the Arts and Greens?

My friend Norm Boggs and I had a busy weekend at local historic sites this past weekend.  The Candlelight Tour at Duke Homestead is certain to remain firmly lodged in memory.  Our contribution was to play for the dancers in an old tobacco barn as the public was ushered through in groups of 25 or 30, one complete dance per group.  Well, to make a very long story short the publicity for this event far outstripped the resources available (namely two old men), and we ended up playing 25 Virginia…

Hey John, want to do this again? So many to pick from...especially with the Glee Book available. It does not have to be a vocal tune. I know Clarke has done "Clare De Kitchen" a lot...this is a good candidate, and another one of those very early ones. The lyrics are classic. It would also make a really good Stroke instrumental.

Great news! I am but a few weeks from finishing my Sweeney replica banjo! This is my first attempt at a Minstrel Banjo build and it is going great so far. I have some locally harvested Black Walnut that I am using and love the look.  Still trying to figure out how to join the ends of my tension hoop. Hardware has been ordered from Pickard Banjos. A few more hand rubbed coats of finish on the pot and I will be ready for the head to be installed. I am convinced that I am forgetting something…

Okay, hang in there with me. I am trying one from each of the different sections in the Lawrence Leadley fiddle collection. As was indicated by our early masters, adapting fiddle repertoire is fair game for adding banjo material-so stay on the lookout. The well is deep.

I just added an appendix from the William Mahar Book "Behind the Burnt Cork Mask" showing the frequency of appearance in early minstrel songsters. It is especially interesting with the availability of the Christy Glee Book.

Hurrah for the turkey banjo 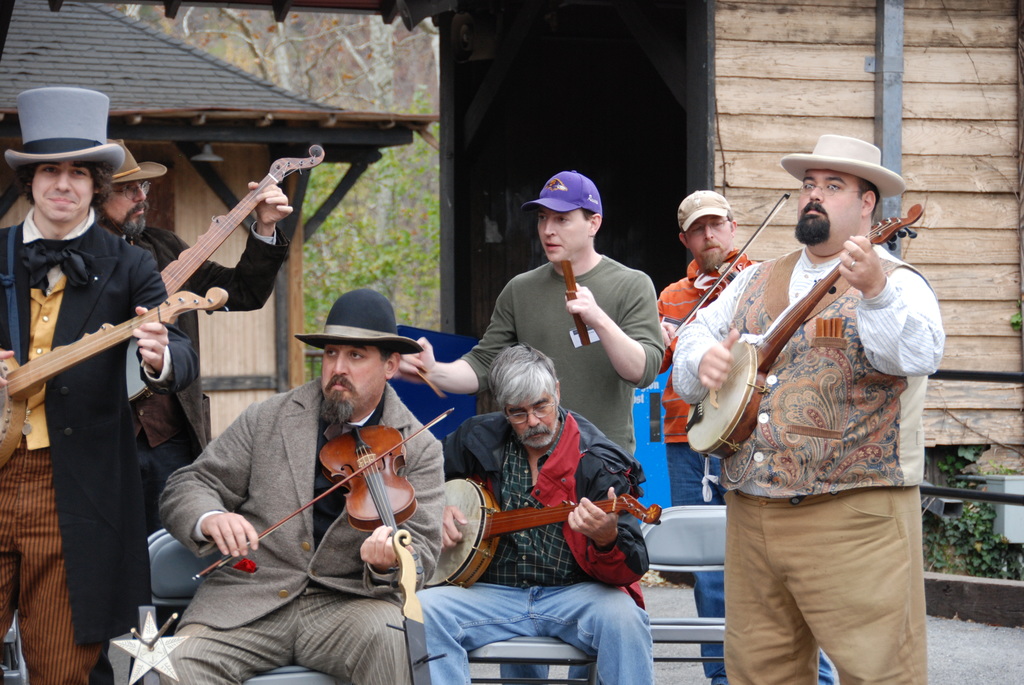 Playing through "Far South"....it had a pretty good feel and the banjo was growling along rather nicely....shoulda checked the light on the camera first. Oh well, I'll leave it up for a day or so, and then scrap it. Just listen..watching gets you dizzy.

Often overlooked, but there are several of them. Not great, but they are worth playing through...occasional gems will pop up. You can discover many re-titled tunes.

Opened up the Green Converse to get a little Stroke break from the Fingerstyle, and here was another take on that familiar melody...Barley Reel

Hey, I just got back from the Classic site. I thought that with my fingerstyle tune they would let me in, but I had to go change. Ian runs a really tight ship there.

Hey Terry...got your call. Call that number again when you are really close...I'll be watching the door...its after hours and will be locked.

Checked the bridge first...here we go again. Added "Fairy Dance". It comes right after "Jim Crow Jig" in the book.

Anybody from Dayton...or nearby? I am going there for a living history event Saturday...one of those where you stay most of the day. Sure would like to spark it up with a percussionist or fiddle player.

Courtesy of member Nicholas Bechtel, there is yet another book to examine. I am posting one piece from it this morning and let him tell you a bit more about it, if you are curious. I have only seen a few pages of it. It is geared toward fingerstyle, but as usual...much adapts to rappin it.

Oh what a dream I had.

I had an amazing dream last night.  A musical, banjo dream.  And instead of it slipping into the ether when I woke up, I remembered some of it.  It went like this:

I was at a Civil War event of some kind.  I met George Wunderlich, who had some music he wanted me to listen to.  He took me to a tent, where he had a sort of reel-to-reel machine.  He said the music was of an early stroke-style black banjo player, who had recorded just before he died in the 1890's.  I kept looking…