Does anybody hear a connection between these two songs?

Anybody do this one? Very popular in it's day.

I found this in Dobson's Book, and realized it is also in Buckley 1868....and I passed it by somehow. Anyway, I'm going to go record it this morning....it is as cool as "Les Sylphides" which many of us have grown to appreciate. I love this style on the banjo. I play it hybrid, but was meant for fingerstyle. 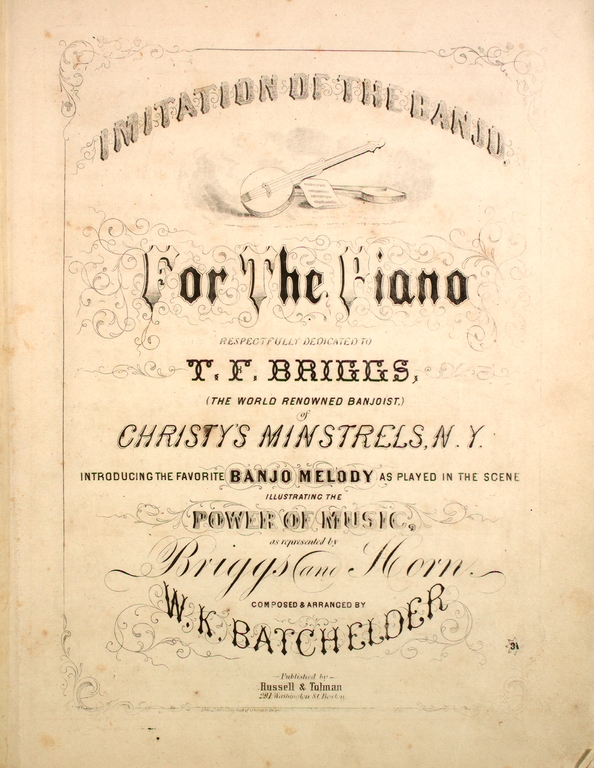 I'm lazy and have not looked. What are other sources of 19th Century guitar music?

What a great time it is to be involved with this early banjo music.....speaking from the viewpoint of the instruments themselves. There are so many fabulous makers out there. Such quality is available to us, AND we can personally know the crafstmen themselves. Getting an instrument made, and talking to someone over the internet as is being made...wow, it's awesome. I wish I could play and own so many more.....I like them all.

Just got my paper copy of the Green Converse Book from Elderly - Huzzah. The PDFs were great, (Thanks again Tim and Rob) but there's nothing like a book of henscratches sitting on the table in front of you.  There's some crazy music in this book.

What has Nellie done to us?

Is everybody else seeing all the "Nellies"?

John,  is this something you (or anyone) can fix?

Trip to the thumb to see the bell

So, when you extending an invite to us Detroit and otherwise southern mitten men?? This lovely spring weather is ideal.

Welcome new members to the Ning Minstrel Banjo site. Don't forget to stop by the "Resources" and watch a few videos from the "Lessons" tab. The first 2 give you a nice greeting and introduction from John, our site host, and Greg, a major contributor.

I'm starting this blog just to keep track of whenever Tom Briggs gets a Google Books mention; he being such an important yet ephemeral figure...

Interesting (1890) tidbit on "thimble" playing here, not that I want…

As I mentioned, I combed back through my playlists on youtube to see what I left out. I found about 5 or 6 from the Converse Analytical (banjo style section) that I forgot. One of them is the about the first one after the introduction of the Combination Exercises. "Rattlesanke Jig". As I look closely at it, it is obviously close to the Buckley Version (1860). It is very specifically fingered, using the Combinations. It seems to be awkward at first, but it transforms itself into something…

As you all might know by now, I have taken down the Banjo Clubhouse for now. Fortunately, most of those resources are widely available now. Tuckahoe is back in biz, so we can support Joe Ayers with the availability of Briggs, Rice, Buckley 1860, and the Green and Yellow Converse. The Buckley 1868, which I obtained form Brown University, will pop up on my revamped site when I get it going. Joel may also have it up on his. I think Joe has plans to add this to Tuckahoe...and I hope he does. It…

Everybody but me might have known this already, but the Green Frank Converse banjo tutor is available again at Elderly Instruments for 18 bucks. It's one of my favorites but I've only ever had it in PDF form. The line forms to the left.

The Battle for Christmas

I've been readingThe Battle for Christmas.  Here is an interesting excerpt about Christmas theatre in Philadelphia in 1843

"The matinee performance at the National Theatre opened with a drama, George Barnwell,continued with a blackface show The Original Virginia Minstrels, and ended with another drama, King of the Mist.  The Ach Street Theatre matinee opened with  Hunter of the Alps, continued with a Comic Song,  and concluded with the…

I'm going to try and put together my "Joe Sweeney" set of tunes for my bi monthly gig at an assisted living facility. In it will be the known tunes he did (according to Bob Carlin) segued to some of the early stuff, mostly from Briggs. It should be a fun set. I have never really done a "theme" show, so it will fun to take it out and see how they lay together. I'd like to lean on a "sawbuck" like he did...but may end up standing.

Whar Did You Come…

Will somebody come out and play with me?

Hey, anybody want to explore Picayunne Butler this week. I am geeked on the idea of following the new sheet music. Instrumental or vocal, this is one of our gems....in the top 5 of Maher's playbill frequency.