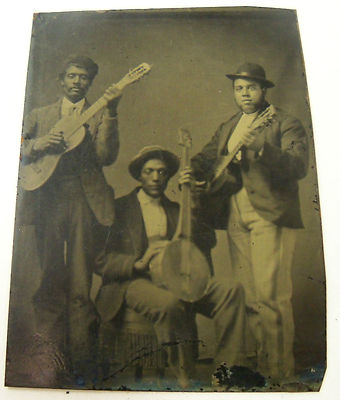 Re: the Black banjo player tintype.  Assuming the photo is from the minstrel era, as it appears it might be, I would love to hear what the guys with the guitars did, a most unusual combination at that time.--Rob Morrison

The clothing styles look late 1860's-early 1870's to me.  I have often wondered why guitar players in the reenacting community don't study primary-source documents like us banjo players do.  If they did they would sound like the guys in the picture.  The only person I have heard play civil-war era guitar is Tim Twiss.

You're going to hear more shortly....as soon as I get this back. I'll experiment a lot...and rely on feedback. I'm willing to try lots of stuff. Be on the lookout for the Charlie Converse book.

I have a friend who plays guitar at many civil war events he attends, usually as a Federal or Confederate soldier.  His clothing is top-notch for authenticity but  I've never asked about about his guitar (looks good to me, but I'm a banjo dude now!  see photo below) or his sources, if any.  Here he is, name's Art Stone -

Guitar aside - Haha!  Dare ya to tell Art to dye his hair/beard!  He's one of the toughest guys I know.  Vietnam vet ta boot!  And ya can't see all his tats (one thing he always keeps as covered as he can during events).  I do want to ask, where's the proof of no gray hair?  Trove through EVERY regimental roster did ya?  FYI some people start to turn gray in their twenties, it's called genetics.

Dan'l, I enjoyed your "line of Santas" phrase...yet that's what we often see.  I've also seen documentaries, etc., about the War of 1812 where some of the troops have mustaches and beards!   They seem to be marching along as though they think they look extra-authentic with their facial hair.  It makes me wonder......don't the producers of these historical projects have any fashion consultants on hand!

Reminds me of how when they made the movie "Cold Mountain", with the battle scenes filmed in Romania, they had a change of plan and decided to recruit actual Romanian young men as the soldier extras in the film instead of American 'extras' actors...because they realized the American bit actors looked way too ...'well fed'.

I think he looks great,,, Id say anybody who worries about this fellows looks,,, shouldnt be worried about .

I know it's been months since this thread was active. I just want to mention that the sad fact is that the reenacting community, for Civil War era events, has aged. Young people are not being drawn into it the way they were when PBS aired Ken Burns' "The Civil War." I reenact as a civilian, mainly because I got into it late in life and I would in no way be believable as a private in either army. But I associate with a bunch of great guys who range from "strapping young, black haired or blonde haired but certainly not gray haired fellows" to the aforementioned "Santa Clauses." If young guys won't sign up to be infantry soldiers, but older guys are willing, I say blink your eyes and pretend...at least someone is willing to carry the torch. Just my opinion, of course.

good to see nothing has changed LOL