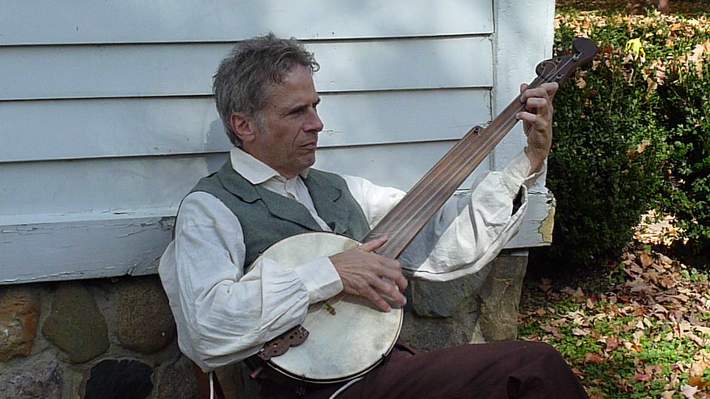 Has anyone tried using Strum Machine?I just signed up for a free trial and am enjoying it, especially because I don't play with others and it seems as though it would be great for practicing.After…Continue

I'm hoping someone can offer insights that escape me.  It seems that Ethiopia gained a lot of reference in the mid-19th C minstrel genre......"Ethiopian Glee Book", Ethiopian Serenaders, Ethiopian…Continue

I don't know if it's good or whether Sam Sweeney might be mentioned but a program about JEB Stuart airs several times on CSPAN2 this weekend.Continue

I haven't yet seen this but thought I'd pass it along.  It also airs at 4 am on Sunday.…Continue

"Maybe small piece(s) of linen, soaked in a solution of Elmer's glue and water. It will dry and shrink securely. Patch "
Nov 15

"Thanks, Patrick.  That might be beyond my experience and know-how but I appreciate the suggestion."
Nov 14

"I had a similar problem with one of my banjos. I wet the area down and stitched up the tear with artificial sinew. (waxed linen I use to sew leather bags). And let it dry.  Worked well for quite awhile. Not much change in sound. Friends…"
Nov 14

Al Smitley replied to Judith's discussion What strings for minstrel banjo, 26" scale
"Judith, I decided to tune your old Bell down two "frets" to cGCEG so that I have a second banjo to help with a couple songs that I can barely reach with my voice.  I have the same problem though I'm guessing you always used that…"
Nov 7

"My string package is like brown rough Kraft paper that is printed. Looks like yours is white paper? Maybe they changed the package at some point. Mine has the color Legend plainly printed on the back of the outside brown package."
Nov 4

"Thanks, Strum.  I looked all over the package and didn't see the codes.  The wound string was obviously the 4th and it seemed they were packaged in order, and.....somewhat verified by the thicknesses of the strings."
Nov 4

"That 'black' dot on yours is really dark blue i think."
Nov 4

"You could 'try' cutting a spare piece of skin to glue over the tear as an (obvious looking) patch. I patched an old tambourine that way."
Nov 4

"Surprised.  It allowed me to like a second time!  Usually, it cancels out my previous "Like"."
Nov 2