Just imagine yourself on stage, gas lights illuminate the stage.  You have spared no expense, every stitch you are wearing has been completely researched.  Every spot on your banjo is an exact duplicate on the original it was patterned after.  Your troop is just about to thump out "Briggs' Corn Schucking Jig" as you reach into your waistcoat pocket to get out your... modified  Hawaiian guitar/ bluegrass pick.  Or even worse, it is plastic.
Or perhaps you feel like you could be the next Horace Weston.
Or wire strings have done enough damage to your nail.
Well, never fear!  Soon you will be able to hold your head (and index finger) high as you'll be wearing one of these...
http://www.hangoutstorage.com/banjohangout.org/storage/photos/large...
That's right, as soon as I work out all of the logistics (and learn a little bit on how to keep books) you can have your very own proper thimble.
http://www.hangoutstorage.com/banjohangout.org/storage/photos/large...
I've already made up a mess of them, I just need to figure out how to sell them to the few who might want them.
http://www.hangoutstorage.com/banjohangout.org/storage/photos/large...
Anyways, that's were I'm at.  I plan on having some at the EBG.

Permalink Reply by Tim Twiss on July 17, 2010 at 10:18pm
Those look really nice Joel. I don't use one, however. I think we did this a while ago, but I wouldn't mind another poll...how many use them? Also, when did they start using them? Why do you guys use them....volume, nail preservation, or what? Personally, I got into this to not half to carry a pick around...simplifying.

Permalink Reply by Tim Twiss on July 18, 2010 at 7:10am
Anybody know the first written reference to them? I can't spot it in the main tutors.

Permalink Reply by Carl Anderton on July 18, 2010 at 10:27am
The first documented mention of a thimble--that would be an interesting research topic. Of course, the preface to the Briggs Banjo Instructor mention that Briggs wore a "shield" over his finger to keep from tearing his fingernail off (because he struck his strings so hard). I have never heard of anyone tearing their nail off while playing, so I suspect the writer of that article was not entirely correct in his assertion. I could be wrong--maybe torn fingernails are a problem for nail pickers. It certainly would be something to avoid!

So that starts us at 1855 for thimble references. The only thing I can add right now are Frank Converse's references to the players he observed who came to his hometown of Elmira, NY between 1852, when he took up the banjo, and 1854, when he left home to take his first professional engagement with the McFarland Theatrical Company in Detroit, succeeding Hiram S. Rumsey, who had resigned.

The first professional banjo player Converse got a chance to study was John "Picayune" Butler. "I had many opportunities for hearing him--not only in his solos, but often listening unobserved below his hotel window. As he played with the thimble, his execution--unlike anything I had ever heard, powerful and brilliant--strongly impressed me..."

Next, Hi Rumsey came through Elmira with McFarlands Troupe--"His knowledge of the "Guitar" style was slight and limited to a few simple pieces and accompaniments. His stage work was with the thimble."

Those look really nice Joel. I don't use one, however. I think we did this a while ago, but I wouldn't mind another poll...how many use them? Also, when did they start using them? Why do you guys use them....volume, nail preservation, or what? Personally, I got into this to not half to carry a pick around...simplifying.

"...he played so strong that he had to get a piece of steel made for the end of his finger, as a sort of shield, to prevent his tearing off his nail."

There is also a pattern for making a thimble in the Converse Method (1865) on the same page as the "guide for making banjos."

Permalink Reply by John Masciale on July 18, 2010 at 2:53pm
We've had some of this discussion before. I added a couple of photos of the thimble I modified from Converse's design to this forum. I'm gonna try out one of Joel's, just because his tooling is a lot better than mine. I see a lot of the same design concerns I had about Converse's design reflected in what he did. It looks good, but proof is always in the pudding.

I use a thimble for some of the same reasons that Carl mentioned, volume, and clean notes, especially higher up on the neck.

Permalink Reply by Tim Twiss on July 18, 2010 at 5:45pm
I see it mentioned, but never seems to be included as part of any valid instruction. I don't have that Converse thing anymore. I gave it to a guy with hopes of him making a banjo some time ago. What does it say? 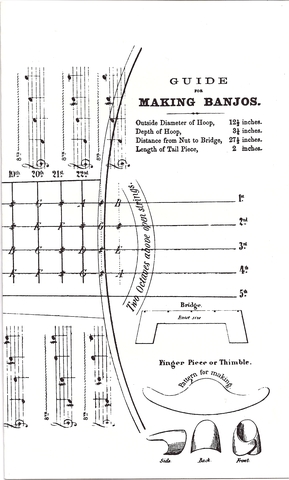