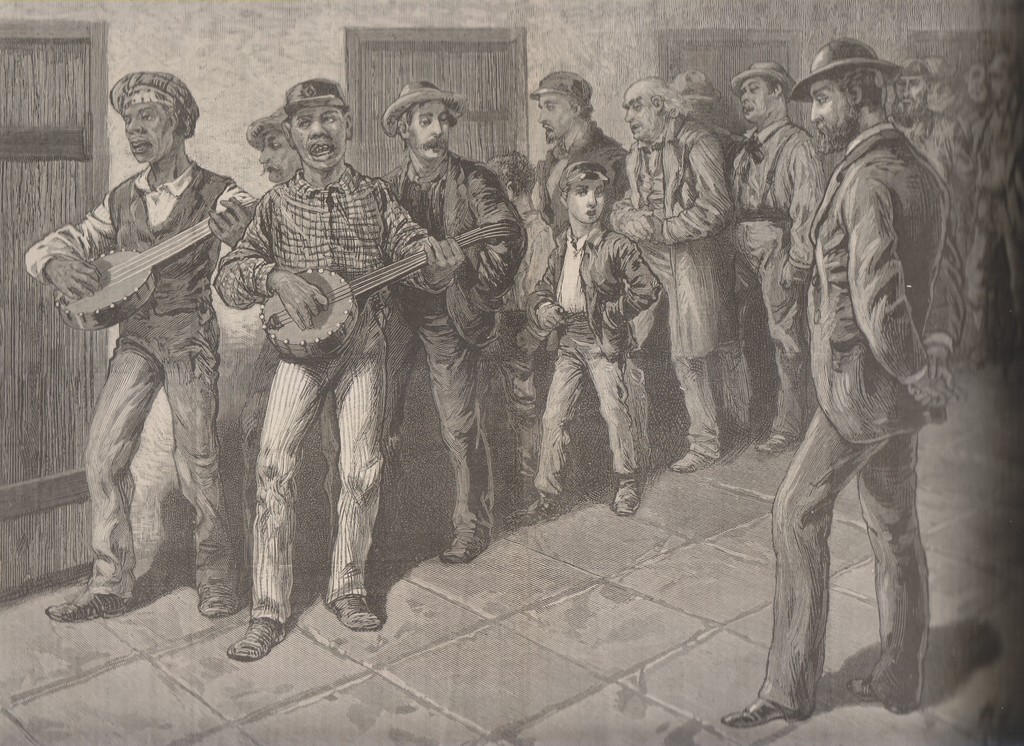 I'm just attached a particularly nice example of one of the contexts in which African Americans played banjo.  The engraving is entitled "Prison March" and it refers to an activity in the Schuylkill County prison in Pennsylvania in 1883.  But it could just as well describe African American marches through the streets of New York or Boston in the antebellum period.

Permalink Reply by Richard Katz on June 11, 2015 at 10:59pm
It appears that their right hands have resting fingers on the heads which would indicate finger style, not stroke? Artist's interpretation or prerogative?

Permalink Reply by Leonidas (Lee) Jones on June 11, 2015 at 11:08pm
I think that is reading a little too much into the engraving. Fine detail is subject to how the artist portrayed it. By 18183, probably though. Bob may be able to tell us more, but I would think it is probably by a white artist, who, most likely, did not play the instrument. Given that assumption, one cannot read too much into it.

I know of a couple of quite prominent people in the classic banjo world who are disdainful for "old time" banjo music. That is just two, but I don't get out much: I expect there are others. But on the other hand, lots of players come to classic style there after years of playing bluegrass or old time music.

Converse may be the only guy who ever thought that ante bellum folk technique was interesting enough to memorialize in writing.

On the ekonting and up-picking: Ulf Jagfors mentions up-picking and down-picking in his interview with Bill Evans ("Conversations with Banjo Historians" CD). You might have a hard time finding a video of up-picking because the guys who document the instrument are most interested in the roots of down-picking. Greg Adams has visited the area himself: If he wishes to chime in we can just defer to whatever he has to say about it.

Richard and Lee, I thought the same thing about the engraving:  finger style.  The caption states "From a Sketch by Joseph Becker."  If the artist drew the scene from life, it's possible that he accurately captured the hand positions of the two musicians.   Unfortunately, I only have the engraving, not the whole newspaper.  So I don't have the article describing the engraving.  But I may be able to track it down.  In any event, what strikes me about this image is that it matches perfectly some of the descriptions of African American banjo playing in the antebellum period, namely, groups of black men marching and singing through the streets of New York, Boston, and Washington, DC.

Permalink Reply by CW Bayer on June 12, 2015 at 12:10pm
I have been talking to a young lady who plays music from Zimbabwe and she is hoping to learn the banjo. Right now she has a cheapo starter banjo. She was showing me the countering rhythms created by thumb versus fingers on the thumb piano--the mbira. Has anyone looked at the minstrel banjo as a derivative not of ad hoc drone string use but as an instrument in which the drone string played distinct counter rhythms? Sorry if I'm asking something that's been covered.

The premise of "raising the artistry" of a particular cultural/social community's music (regardless of whether that social class and culture is rich or poor, or educated in Western institutions or not) starts with the assumption that it had a low level of artistry to begin with.  That's both arrogant and ignorant, whether it happened yesterday or 200 years ago.  A more accurate view is that they observed a music style, technique, and instrument that they judged to be of interest to them but 'lowly' and inferior as compared to their own culture's music and standards, and decided to adopted and adapt it to their own familiar cultural stylings, repertoire, and purposes.

My problem is in the whole concept of viewing the evolving/mixing/borrowing/adapting styles and techniques and repertoire as becoming more 'advanced' or 'superior'.  It certainly changed over time, reflecting each social group's dominance, time, place, and popular tastes in turn.  Whether banjo playing became more 'advanced, artistic, or superior' as time went on after the 1870s is purely a matter of personal opinion and taste.

Permalink Reply by CW Bayer on June 12, 2015 at 1:17pm
As she explained it to me, there is a primary melody in one rhythm and a secondary melody in another. I tend to believe this developed from an earlier practice of a secondary rhythm on a drone. That being said, when I was looking at the historical Celtic harp--going back a couple thousand years and now lost--it had a drone basis but the drones emphasized the melody note on the downbeat--like a basic drum. So I think drones started on the beat and then moved off the beat and then moved to counter rhythms and then to counter melodies. Just my thought. With some of the 1860s stroke style music in tutors I struggle to find a place for the drone string to create any drive or lift. It is tempting to reduce the complexity of the melody. The alternative seems to be to stick the drone string in and make the whole thing even busier--exhausting. Adding the texture and drive of a whole chord sound are similarly a challenge with the intricacy in some tunes.

Permalink Reply by CW Bayer on June 12, 2015 at 1:41pm
I might add that I find it curious that we have no western/European terminology for the use of drones. We think of music as chord based. And, I think with German influence, American popular melody becomes much more chord based after 1870. Still, a lot of ancient and non-western European music is drone based.

Permalink Reply by John Cohen on June 12, 2015 at 1:48pm
It's my opinion that the fifth string is used more as a pedal tone than a drone in early banjo music.