The question of these comes up fairly regularly, and because we have many new folks here, I'd like to reopen the discussion. And please, lets keep documentation at the front, and speculation to a minimum.

My theories expressed previously, I have written before. I will realist my reasons. But before I do, I would like those more familiar with modern old time banjo to share the reason for "Scoops" in all the regional folk style banjo playing.

To point out what I mean. There is the noted missing portion of the banjo's fingerboard near the rim present on many "early" banjos. Many may be view in the recent photos that I have posted...

Here is Sam Devere is holding a nice example. I'm going to post this, then reply because for some reason all the imbed buttons are missing for examples.

Here is Sam and his banjo, http://minstrelbanjo.ning.com/photo/sam-devere?context=user

and here is a random old time banjo player found on the inter web...

Lets compare the logic behind both.

The modern old time banjo scooped area allows room for the index finger to 'dig in' and the middle finger (and other fingers) to frail down and outward without hitting the fretboard. Old time banjo action is way lower than our minstrel banjos. As the tunes become more melodic and complicated over time, the scoops have become more popular. These players LOVE the sound of playing up the neck, it's a 'gong' sound vs. a 'ding.'

The minstrel banjos of the past which have scoops I don't believe have the same purpose. Sorry, this is speculation, but as a player for 35 years and a builder for 10, the scooped minstrel neck is easier than junior high shop class to attach. A 'scoopless' neck is a WHOLE different story. Furniture makers, casket makers, and carpenters who used to make minstrel banjos, who tackled the problem of, and succeeded in, bending a rim were next faced with the almost impossible task of fitting a full heel to a rim, with or without the dowelstick attached during the process. An easier way was to cut the peghead, neck and 'dowel' all from one board (African style) and with only little 'wings' as 'stoppers' at the heel area, just slide the dowel into the rim hole, and +click+   ... you've got a perfectly fit neck.

Hi Joel - sometimes when playing Old-Time tunes i play out over the neck of my fretless or fretted banjos in order to vary the sound -- either making it a bit softer or giving it a "clucking" sound.  This can be done with or without scoop, but is easier with scoop because the fingerboard doesn't get in the way.  This way of playing goes well with Old-Time tunes played clawhammer style.

My 10 years experience in woodworking and practical mind tell me Terry is most likely right.  I chose to do a full heel on my current, and first, banjo build.  I can tell you Terry is right that it would have been much simpler just to do a scoop.  That would have saved me a bunch of time for sure.

In my intense studying of traditional woodworking (which is my preferred method of working) for a few years now I have noticed that the builders of old were nothing if not practical.  So I'd agree that in many cases it was probably done simply for the ease of construction.  Then as now, time is money.

The first minstrel era banjo that I made had a slot cut in the neck so that it would fit around the rim of the tension head.  What I discovered was after a point I couldn't tighten the head because the neck was getting in the way. Last year I reworked the neck, and put a scoop in:  problem solved.  The scoop is a practical and elegant solution.

You guys are making a lot of sense.  I bet you're right about the ease of construction thing.

The modern old time banjoist will play to soften the sound like Paul wrote.  Playing over the neck does give a gentle dulcet tone to the modern wire strung banjo.  The addition of some sort of "stuffing" inside the banjo is also common.

Not a single banjo in the SSS catalog had a scoop listed, as a matter of fact he frequently made fun of banjos that had them.

There was a very insightful article in the Banjo Newsletter about the modern scoop and use.  March 2008, Ken Perlman, then a follow up by Bob Carlin a few months later.  Both respected names, both agreeing with documental evidence, that the "modern banjo" (Stewart pattern and later) did not get scooped until the 1970s.

There is one major difference between Sam Devere, Ban Bryant, and the modern old time banjoist and that is the microphone.  The 19th century banjoist would not have done anything to reduce the output of clarity and volume to his banjo.  The power that our tubs have was part of the reason for the common stage use.  Playing over the neck takes that power away.

I agree that fitting the neck could have been part of it.  The flour sieve tack head with pine neck would have taken full advantage of any way to make it easy to build.  The tacks would have also needed room.  I feel it was also a "look."  Sort of taking on its own aesthetics, becoming "old time" in that era.

What about the fact that when most of the Northern urban mass-output banjo factories were in full swing by the early 1900's this was a time during which the predominant style of banjo was fingerpicking and tangocraze/classical/parlor/banjo orchestras etc.  (not as much frailing or stroke style.)  Elaborately pearl inlaid expensive Orpheum banjos were not being bought new by poor southern mountain frailers, after all.

Such 'refined' playing styles were almost always picked nearer the bridge rather than over the neck- note too the old photos of that time/banjo orchestras- see the dark finger wear on the skinheads, always nearer the bridge,  same spot as when people posed for the pictures.  I suspect any actual playing use of scoops would be done mostly by stroke/frailing/clawhammer types and not by fingerpicking or classical banjo players.  And it was in the 1950's-60's that frailing began to enjoy a revival.

Joel--The reasons for playing over the neck as opposed to over the pot are many, actually.  Depending on how one holds the instrument, it can be more comfortable, for instance.  As already mentioned the tone tends to be mellower.  Also, because one is near the center of the string's length, it requires less energy to move or vibrate the string.  This doesn't make as much difference on a nylon or gut strung instrument, but it can make a big difference with the more unyielding steel strings typically used on old-time band instruments, be they contemporary or antiques.  If one is playing over the posted speed limit, the relative ease of playing can make the whole experience less daunting and painful, especially in situations such as playing for cloggers with their insatiable appetite for speed.  In public forums the minstrel players probably did play right over the head, but I would be surprised if in more informal settings they did not partake of the pleasures of playing over the neck.

As a Builder I guess as it has been said the the scoop on the early banjos was to get an easy fitting to the Rim.

Hi David, that was also mentioned in the BNL articles.  But I don't know about the modern era "firsts," we all know Scruggs was the first to pick the strings and use rolls.  We all know that Joel Sweeney was the first to add the fifth short string... see were I'm going with this.

As to playing method, I will sight again the "tutors."  They are some what creditable, because of the support they got else where.  Newspapers regularly ran articles about the banjo.  The Sun, The Clipper, The New York Times... they all did because it was popular.  Often these articles were criticized by the likes of Albert Baur, Stewart, Converse, Partee, &c.  But no one wrote that the description of striking the stings near the bridge was incorrect.

If is was common enough to alter banjo construction, is would have shown up in print.  Now that I see the buttons, I'll imbed some examples. 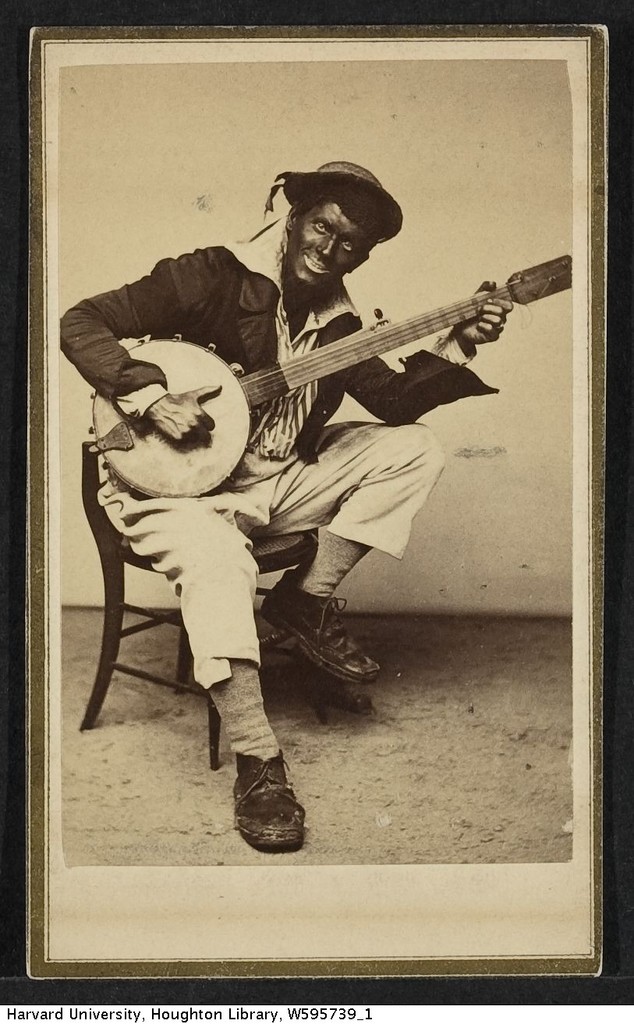 Here is a good example.  Dan Bryant.  Look at the photos of the famous minstrels I posted, all in playing position are playing near the bridge.

To further the discussion on banjo construction, the necks, properly set, were flat with the head.  Most used 1/2" bridges, even the tubs.  The back angle came about to keep the plectra banjoist from tearing up their heads.  The "Gibson" pattern is the result of putting a five string neck on a plectrum banjo.