I'd be interested but the site won't open.  I'll try again later.

Weird, the URL opens for me fine, even as pasted.

Well, here's what was there: I posted it because I wondered how likely you all thought it was that Crockett (1786-1836) would have played a gourd banjo.   ?

Does anyone know of any reference to him having played any instrument?  And what are your thoughts on what kind of instrument he might have likely played if he did?

I had to dig around for the CD that I've had for some time.

Supposedly, he played the fiddle and I think the CD says that the fiddle shown on the front of the CD, may have been Crockett's.

In the notes, it says, "Inside the fiddle is written, "This fiddle is my property, Davy Crockett, Franklin County, Tenn. Feb 14, 1819."  Although this seems to be further evidence that this is in fact David Crockett's fiddle, scholars agree that even though many of his contemporaries called him "Davy," he never referred to himself by that name.  It is likely that this is David Crockett's actual fiddle with someone later writing this inside to support its authenticity.  Both violin experts T. S. Quinn and Frank A. Hollins have given affidavits attesting to the truthfulness of their statements and its link to David Crockett." 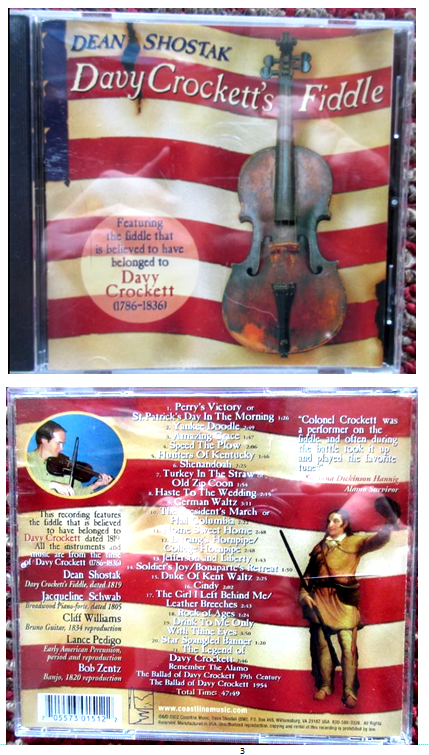 The most recent movie had him playing fiddle during the siege of the Alamo.  I can pretty much say that he did not play "Listen to the Mockingbird" as he did in the movie as I think it was published in the early 1850s.

Cool, Al!  Is there any photo of the 1820 reproduction banjo played on the CD by Bob Zentz?  Do we know anything of Zentz?

I did find this YT vid of Zentz playing a 4 string gourd banjo here:

that must be the one he used on the Crockett CD as his 1820 reproduction banjo.

You beat me to it, Strum.  I don't remember much about the CD.  I guess I'll have to listen to it.

I have to say, however, that if it was particularly compelling to me, I likely would not have forgot it and would be more familiar with it.

David Crockett wrote in his "Sketches and Eccentricities of Col. David Crockett of West Tennessee" (1833), that he witnessed a black man play a banjo for dancing in a tavern in Tennessee. He called his banjo "Sal". He beat time with his feet and played what appears to be a version of "De Old Jawbone", published 7 years later by Sweeny himself. Referenced in The Banjo, Laurent Dubois, pg. 164-5.