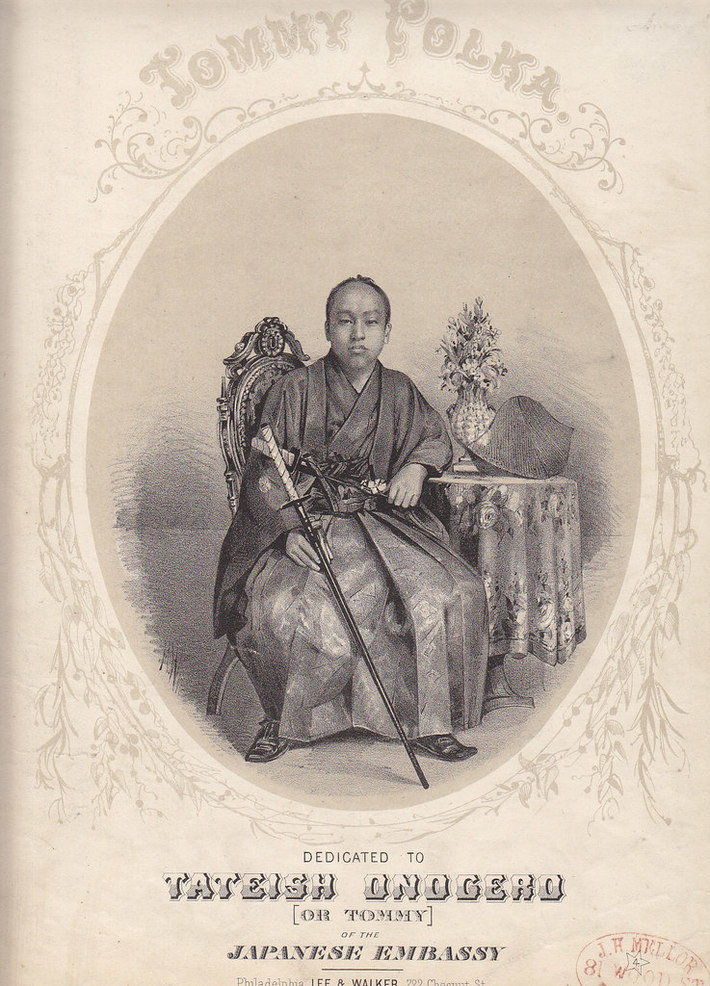 Here's a piece of sheet music that Samurai Banjo may find of interest. In early 1860 a large delegation of Japanese officials landed in Washington, D.C., seeking to meet with President Buchanan to renegotiate some of the more onerous provisions of the treaty concluded in 1854 with Commodore Perry.

Seventeen-year-old Tateishi Onejiro ("Tommy"), a junior member of the Embassy, was widely written about in the American newspapers for his inquisitive nature and his flirtatious behavior toward the young ladies he encountered in Washington, Philadelphia, and New York City.

Alas, the "Tommy Polka" by Ch. Grobe isn't scored for the banjo. (Buckley's 186o New Banjo Method, on the other hand, does include a couple of tunes, such as the "Tycoon Jig," that also relate to the Japanese Embassy.) But it's a good jaunty tune. You can see a Japanese old-time group playing it on YouTube (under "Tommy Polka").

By the way, an African American minstrel named Thomas Dilward adopted the stage name "Japanese Tommy" soon after the appearance of the Japanese Embassy in America. But that's a story for another time.

Tommy is 'Tateishi Onoziro'. His descendants held a concert in Japan honoring his achievements. This is Tommy Polka played then.

Tommy Polka is among my favorites.  I've struggled with the higher octave "C' part but am starting to get it.  There are several YouTube versions.  I like them all!