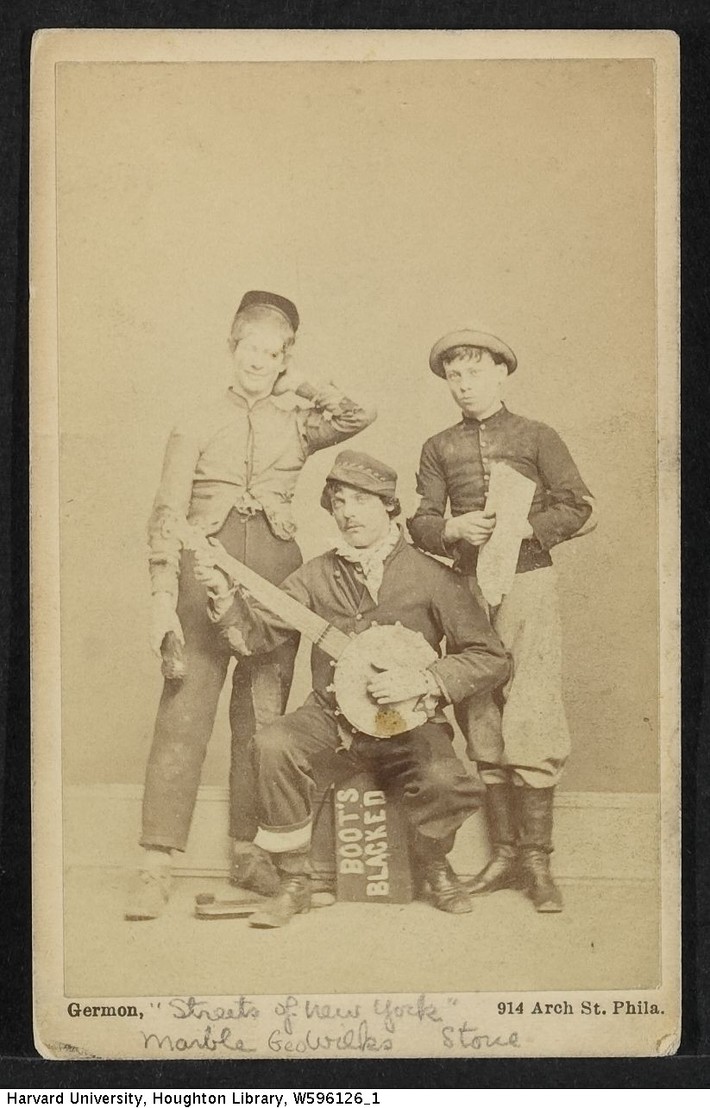 George Wilkes is holding the banjo. He was a known for his female impersonations. He died October 1, 1870 in Memphis, TN (which means that the banjo he is holding was built in the 1860s).

The "Boot Black" routine must have been a laugh riot as it continued to be a standard well into 1900. I've read it... I guess I would have had to be there to get it.

This, as many others that I have put up, were publicity photos.  These were published and sold/given away by the hundreds.  All three of these guys were established in the industry by the early 1860s, each playing with various popular acts.  The reverse image was probably righted at some point during its printing as technology changed.

The "Black Boot Blacks" sketch was a standard stage routine that was used well into vaudeville.  I don't see why the presence of props associated with a very common act would say "amateur" considering that they were popular enough to have a publicity shot done.

The "Boot's Blacked" is a gag on the routine.

That was a "greatest hit" of the minstrel stage.  Same bits, over and over again.  There was a letter written to the SSS Journal commenting about E. M. Hall doing the same routine he has been doing for decades in the 1890s.

Anyone seeing this photo would have gotten the reference-- exactly like reading "Get-R-Done" or "Excuse Me!" 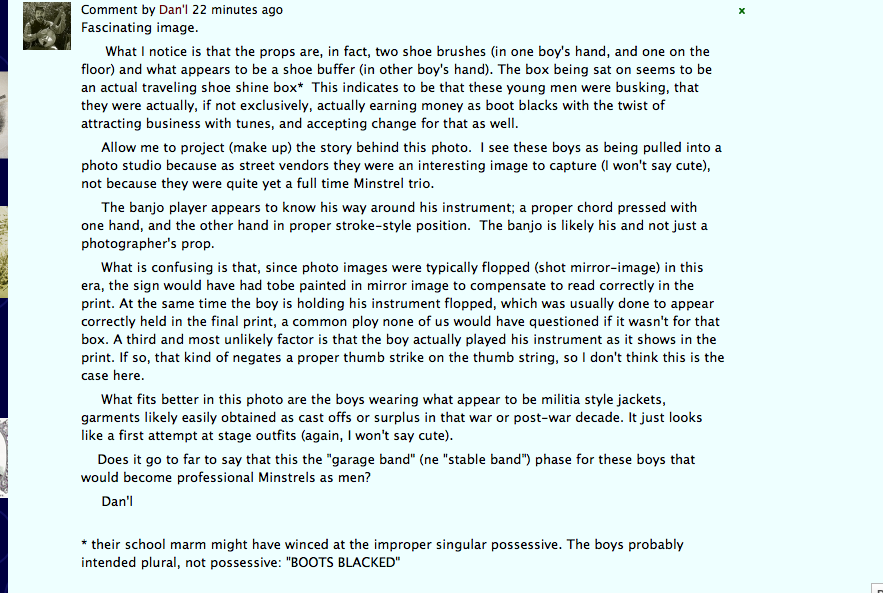 They reversed the pose? That is very interesting. It explains why there seemed to be so many left handed banjo players in collections of minstrel era banjoist photos. I learn something new every day.

Dan'l made an interesting observation that I missed.  The banjo in this photograph is reversed--that is, upside down and backward--either because the player is playing it in a left-handed manner (unlikely) or because he was following an earlier photographic convention.   We discussed in another thread how certain photographic media of the time--daguerreotypes, ambrotypes, and tintypes--produced a "reversed" image.   Thus, to appear as though they were playing normally, banjoists held their instruments upside down and backward for the photographer.   But this image is a paper photograph in carte-de-visite format that was printed from a glass negative.  Therefore, the image is "normal," that is, not reversed.   You can tell this from by fact that the "boots blacked" legend reads normally.   Carte-de-visite, or card photographs became popular around 1860 and were widely traded during the Civil War.   Apparently, the banjoist here wasn't up on the latest technology and thought he was posing for an ambrotype or tintype.

By the way, I also share Dan'l's suspicion that these young guys are not actually the minstrels Marble, Wilkes, and Stone.   But then I could be wrong.   I'll have to see if I can find more information about their namesakes.  The minstrel photos in the Harvard Theatre Collection are a real research treasure.  Thanks to Joel for posting them on this site.

Hi Bob,  Please keep in mind that this, as the others, are publicity shots.  They were copied and recopied.  Anything could have happened to them.

As to who they are…  I know we want the past to be a mystery but in the case of famous people... 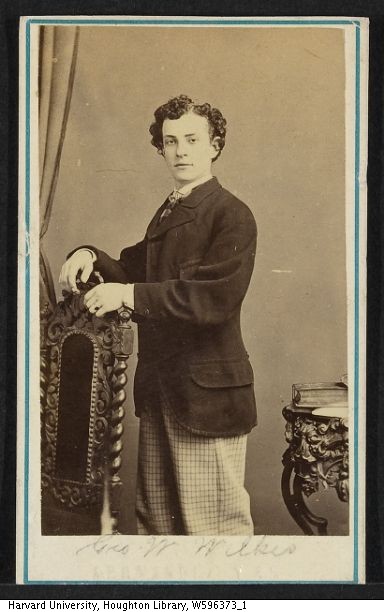 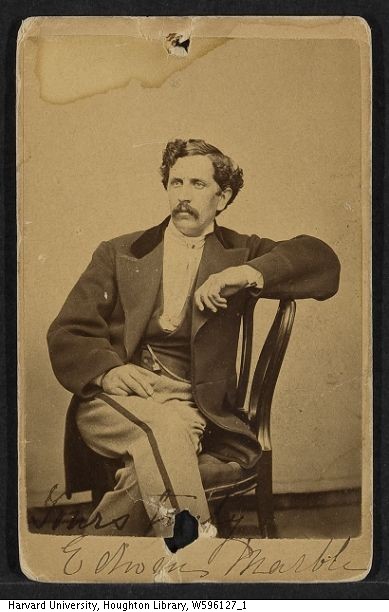 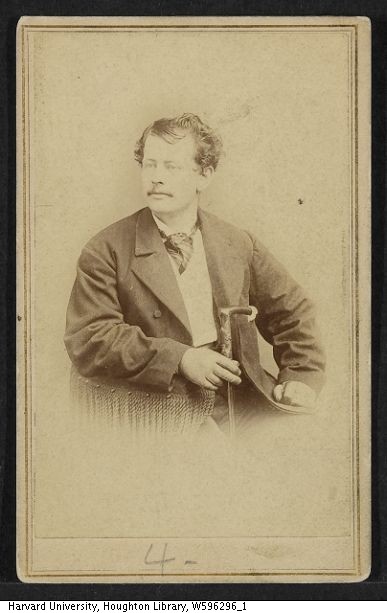 …they are pretty easy to find.

What I found interesting about the original photo was the actual banjo.  It is fairly early-- perhaps prewar or during war.  It has 14 brackets and a pretty refined peg head.  The fifth peg comes in at the side.   It is keeping with the style of banjos used by pros in the many other photos from the Harvard collection.

Also of note is his "playing hand" position near the bridge.  Playing over the "scoop" (modern term) is hardly ever seen in photos.

The "scoop" itself is sharped edged and dramatic-- far more than the gentle modern version.