"I am still curious why stroke became the predominant style since it is the more difficult style to master."

Richard, I find the most difficult style for me to learn is any one I don't know yet.   :)

Permalink Reply by Richard Katz on June 9, 2015 at 7:39pm
Amen Strumelia! Stroke style has been far the most difficult and non-natural feeling style for me to date. By the way...I have a lovely James Hartel Boucher being custom made for me and to be completed by July 1st. I am beyond excited for its arrival. Jim has been wonderful to deal with.

Oh you will be very happy with your new beautiful banjo!  It will be PERFECT.

You know, I learned clawhammer style about 17 odd years ago (I'm a relatively beginner player compared to some of the really experienced and skilled players here) and at the time it was the first time I ever picked up a banjo.  Coming from amateur playing of cello, mandolin, & mountain dulcimer which were more 'normal' instruments,  clawhammer/downpicking/frailing felt like THE most dastardly infernal unnatural torture ever invented.  So awkward!!   Took me a while but I had good mentors and was determined.  Now clawhammer seems quite natural and in fact ingeniously intuitive.

When I decided to learn 'stroke style' about 5 years ago, I approached it thinking it would be very different from clawhammer, from all I had read ahead of time.  Instead, I found it to be so similar to clawhammer as to be confusing at times to keep them separate.  I had to take great care to not simply 'lapse' into my comfortable downpicking habits.  That in itself made it a bit difficult to discipline myself, but I try my best.

Nowadays, i still consider myself to be a beginner minstrel stroke style player...I have trouble with say triplets and up the neck stuff.  But my stroke playing, even though it uses many of the very same claw elements I already know...is nonetheless different sounding than my clawhammer playing.  There are some subtle but important differences that create an overall different tone.  I also think some of the 'differences in sound' are actually because of the very different typical repertoire played. The Minstrel era and the oldtime stringband era had different repertoire and flavor.  I approach it with the mindset of taking pleasure and pride in finding those little differences so that my clawhammer and my stroke style can have flavors that are distinct from each other.

I love to discover new little turns of phrases, rhythms, and fingerings that expand my lifetime enjoyment of the glorious banjo.

"I am still curious why stroke became the predominant style since it is the more difficult style to master."

Richard, I find the most difficult style for me to learn is any one I don't know yet.   :)

Indeed!! In dabbling with fingerstyle, I found it most difficult. On the other hand, stroke style feels very natural to me. Its all in what you;re used to.

I started with stroke style (being a pianist) and it is natural for me.  I suppose it is a matter of training and practice. 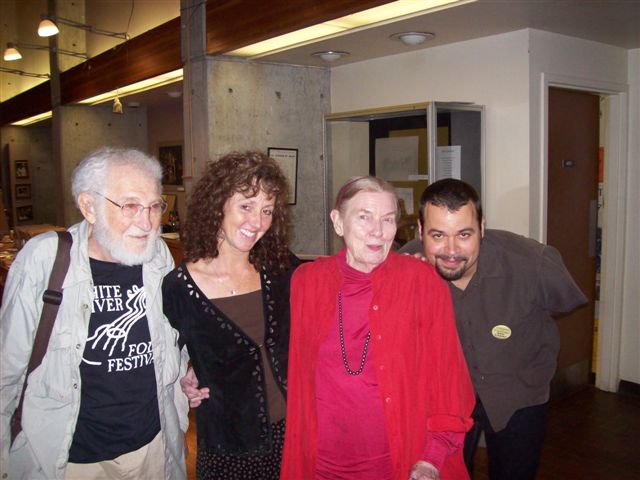 We got to spend a week with Jean Ritchie in 2008 when we were both on staff at the Swannanoa Gathering. She was a lovely woman and contributed so much to the field of traditional music. Her son is coming this year to do a tribute to her. www.swangathering.com

When did evoking 'folkies' or 'folk' musicians become a way to somehow discredit people or their posts?  Seems to be becoming a thing here.  I think you've all been watching "A Mighty Wind" too many times.  Or maybe "A High and Mighty Wind".  lol   'Oldtime musician' is apparently a derogatory term here now as well.  So it's like, ok let's just put down everybody, shall we?

Maybe just my opinion, but I think it's good to have a little respect for all kinds of musicians and cultural sources.  Music gets handed down through the generations regardless of whether 'we' judge it authentic or copycat...it survives because people like to hear it and play it.  That makes it all good.  If I hear a Japanese folk song somewhere and then go home and fake my own cockeyed version of what I can 'sort of' remember...well that's good music too!  Humans making music.

Because there is such a fragmentary amount of concrete information on banjo techniques pre-1830s, it becomes all too easy to make conjectures and conclusions based either on a few isolated pieces of evidence OR on the lack of evidence.  Everyone sounds like a bonafide expert if they state their opinion and personal conclusions as fact.  There are many people who have done or are doing serious research and writing conclusions.  And there are many 'armchair experts' as well.  But can't we discuss such things without disparaging musicians and genres we might look down on?

By the way a bit off topic, but Jean Ritchie passed away this week at the age of 92.  Born in 1922, not only was she a key figure in the urban 'folk revival', but she was also a 'folk musician' in the truest sense of the word, having learned the music her rural family (her 'folk') had passed along for generations, in a strong unbroken from their Scotch-Irish ancestors.  While growing up in her family, and indeed in her community of Viper Kentucky, music was just a part of everyday life then- during work, play, worship, dance, courtship, and relaxation.  Jean's elders had no access to banjo camps, symposiums, presentations, reenactments, or music festivals.  Was she a folk musician?- absolutely.  But she was also likely more 'authentic' and knowledgeable about traditional American music than just about any of us.

Cecil Sharp and Maud Karpeles, trained music scholars/teachers who transcribed into standard notation hundreds of ballads directly from isolated traditional mountain singers during the early 1900s, often admitted that their formal transcriptions of the oral music tradition could not convey the rich and subtle nuances of the live performances, and were only academic attempts at laying out the bones of the song.  Reading their ballad standard notation is like hearing the midi version.  It's the live musician who usually adds the spice and energy and variations,
Most older creative fiddlers change up the notes in their tunes all the time, playing the tune with slight variations each time through.  I know I do that on banjo all the time.  I think most tunebooks and tab books have the same problem when transcribing music that is from the traditional/popular folk setting, as opposed to formal music from commercial composers.  People who try to tab out Tommy Jarrell and Fred Cockerham's recordings have a terrible time.  Roscoe Holcomb?- forget it.  I'd like to see some tab or notated versions of Roscoe Holcomb's stuff...now that would be something impressive!

Ok, sorry to veer a little off the thread title.

I envy you Mark!

(you look soooo mischievous in that pic! lolol)

If I recall, I was a bit tipsy!

Permalink Reply by Leonidas (Lee) Jones on June 11, 2015 at 10:54pm
From the living historian's point of view, this is exactly the point. We know that this technique was used in this period, and that it is authentic. While other styles were probably used as well, we do not have the documentation for it. I am glad to be able to tell spectators when I play for them, that the technique with which I play is authentic, and even the arrangements I play existed at the time. Admittedly, most of them would believe anything I told them, but I look at that as a sign that I must be as authentic as possible,

I agree, we will not ever have any tidy precise timeline of all banjo styles pinned down and tied up neatly with a ribbon.