When do we get the live feed from the Pry Barn in Antietam?

Sure wish I was there!

How dare they leave us here all alone!!!  Someone call the TV news truck!!!!

Maybe it's an internet safety feature which only allows so much banjo music to be live streamed onto the web at any given time.

I think seeing it and not being there would only make me so jealous as to shut it off haha!

Wish I was there to!  Ours family plans for the weekend fell through at the last minute or else I would've made arrangements and registered long ago!

I knew I felt a disturbance in the force. There are banjos being played on hallowed ground... 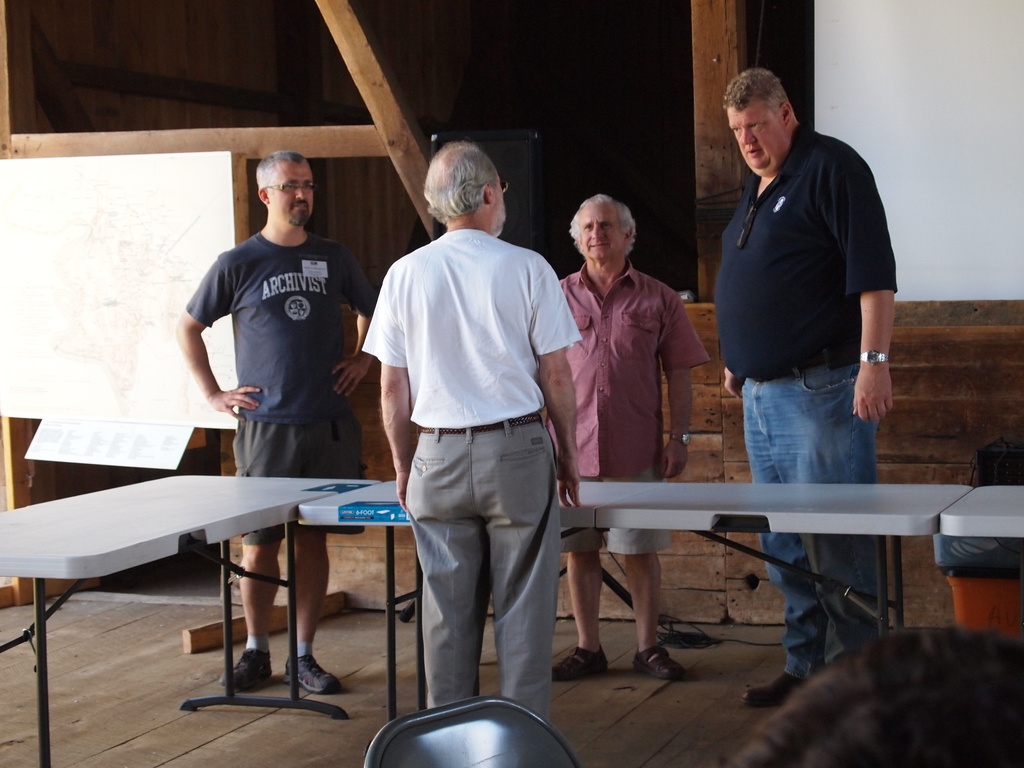 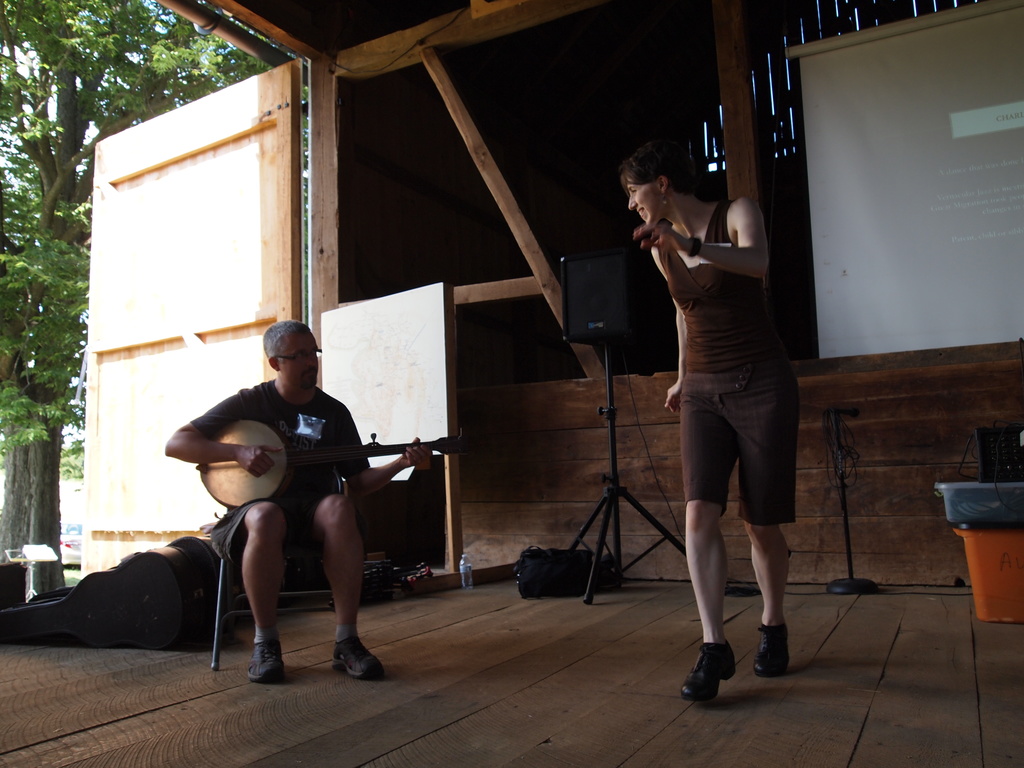 And now for something completely different...  Emily Oleson danced her paper, on 19th century percussive dance and such.  Lessee, "Exploring 19th-century vernacular dance concepts."  Here, I believe she is exploring a Caribbean dance synthesizing West African motifs with a jig, or something; anyway it beat the heck out of a bones solo. 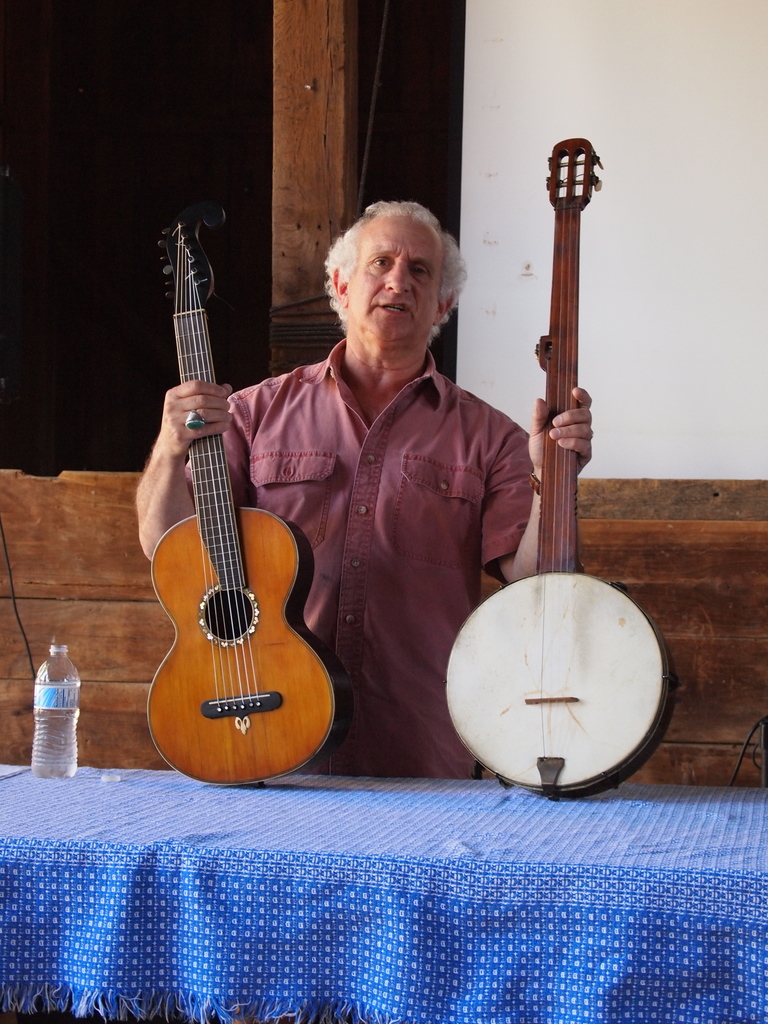 Peter Szego drove down and back from NYC with a carload of things like this.  An 1833 Martin guitar (the first one known), and one of those old Ashford banjos, heck there are six of them known.  Floor around his display table was covered with drool, but I guess that happens whenever banjo players get together. 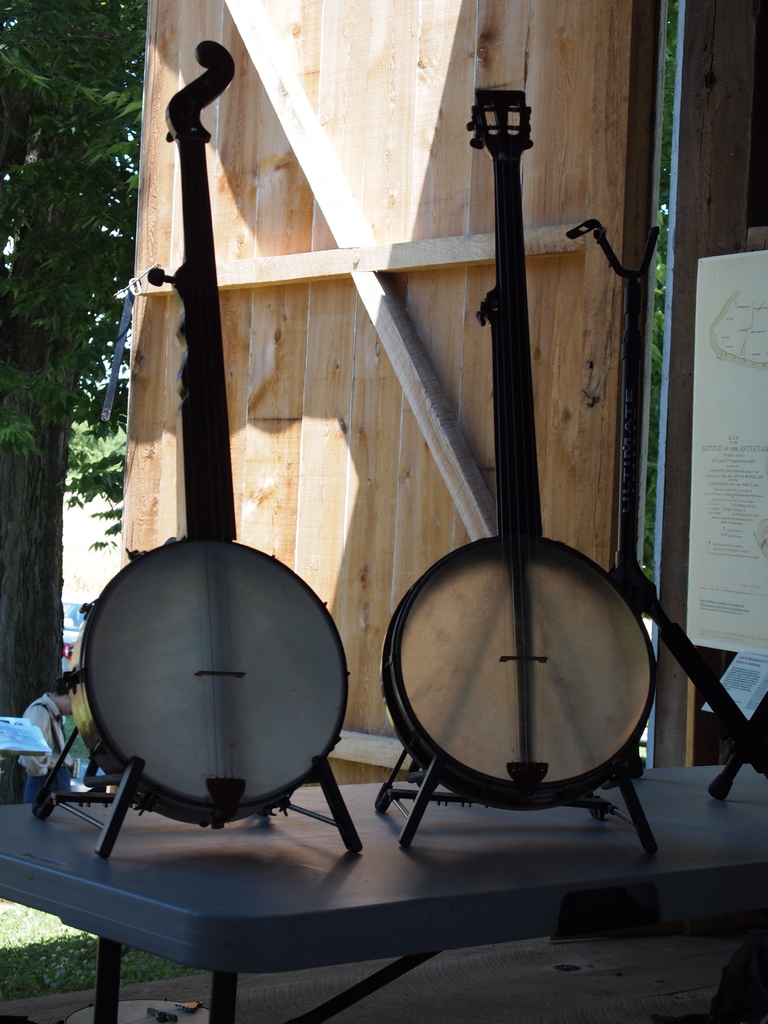 Another one of the old Ashfords, beside a Boucher.  Bob Winans carries these in a double case and plays them at the gatherings.  Makes it almost hard to decide which one of these guys to kill. 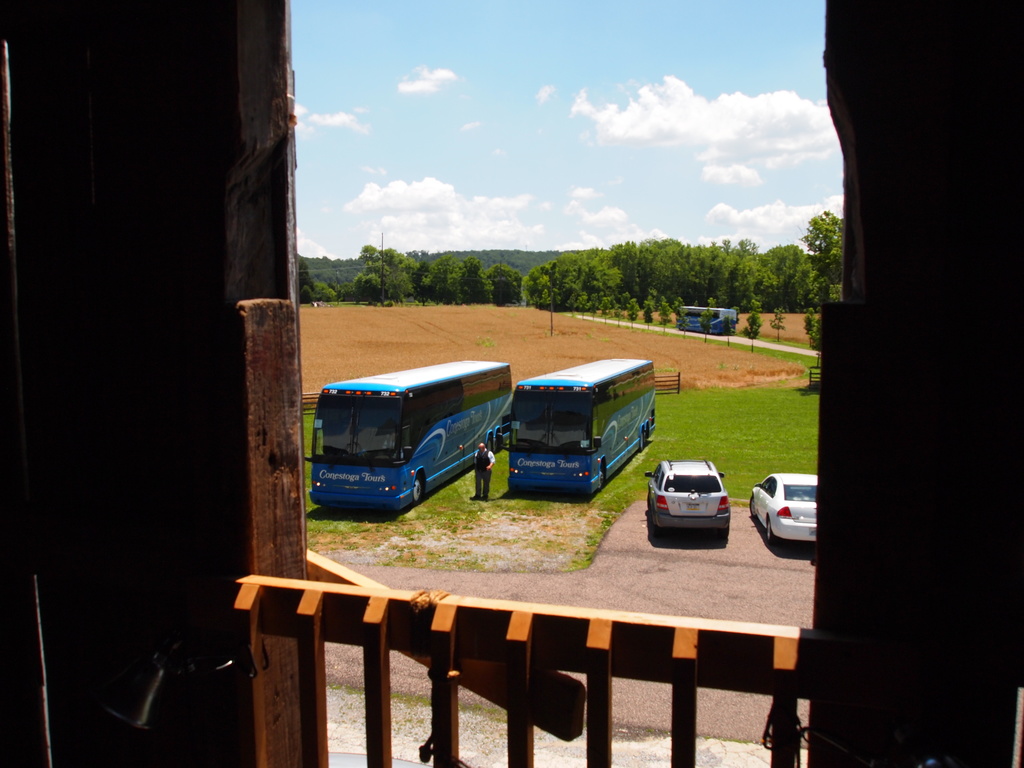 The Saturday concert in the Pry House barn was at five in the afternoon on a fine day, and was well attended, maybe better than any of the previous ones.  Here some of the crowd is arriving from Lancaster, PA.  (Well actually they were touring the Pry House, but anyway it was a good crowd.) 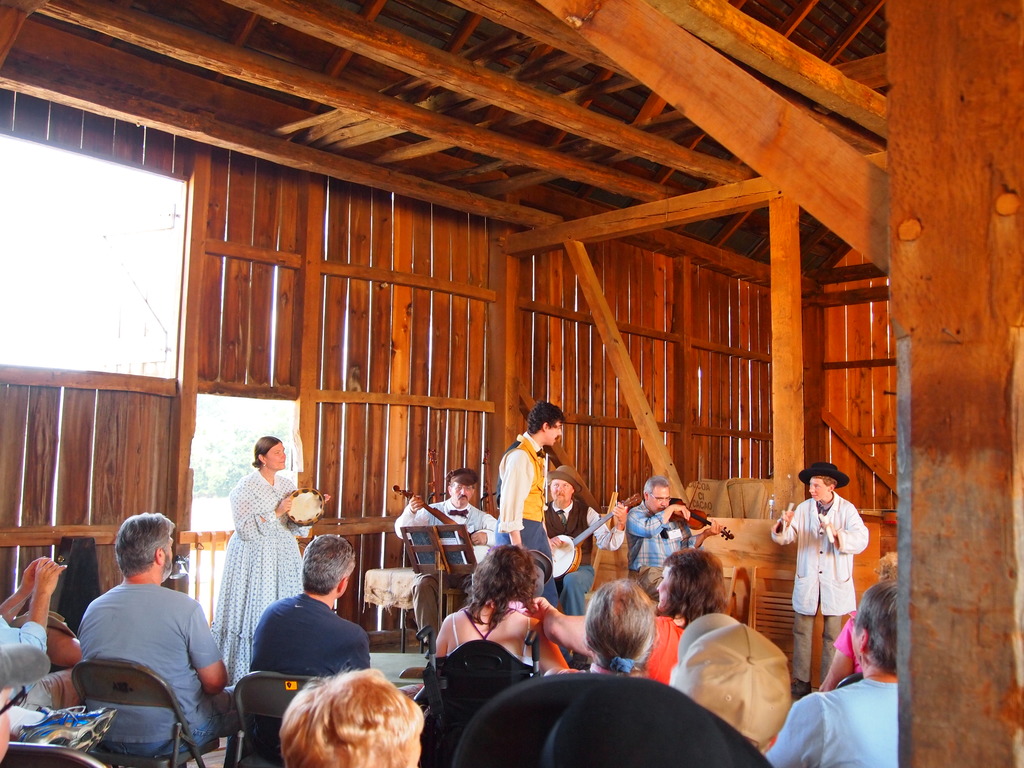 Here's the minstrel line as interpreted by one of the several ad hoc ensembles that assembled themselves, on pretty short notice, to perform for the said large and enthusiastic audience -- of people who, for the most part, never heard tell of such a thing.  Now they know more than they did yesterday morning.  So do we all.

I assume there will be some video and whatnot, once the Masciales and maybe a couple of other people get home and have time to upload stuff.  I only had a digital camera, so all I can do is tease you guys.  As always, there was a lot of informal mentoring and such.  Here Greg Adams is demonstrating a trick (involving two index finger pull-offs in a pretty fast run) to several people. 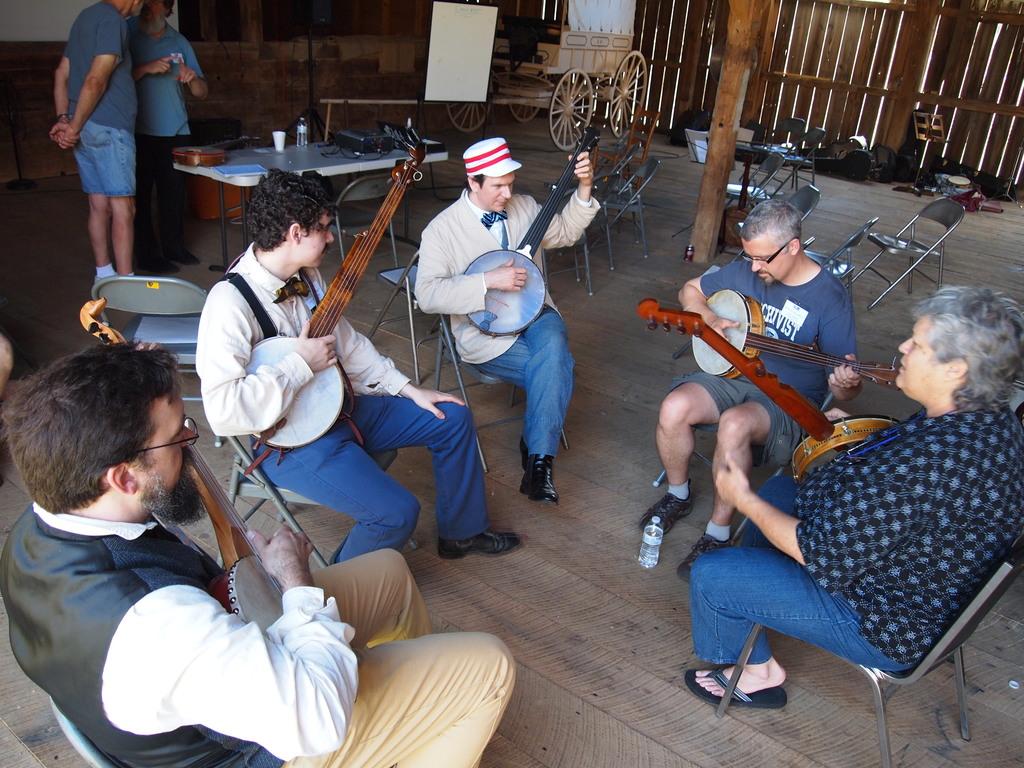 Peter Szego wouldn't arouse our envy with one early Martin, that would just be cruel.  He aroused it with four: 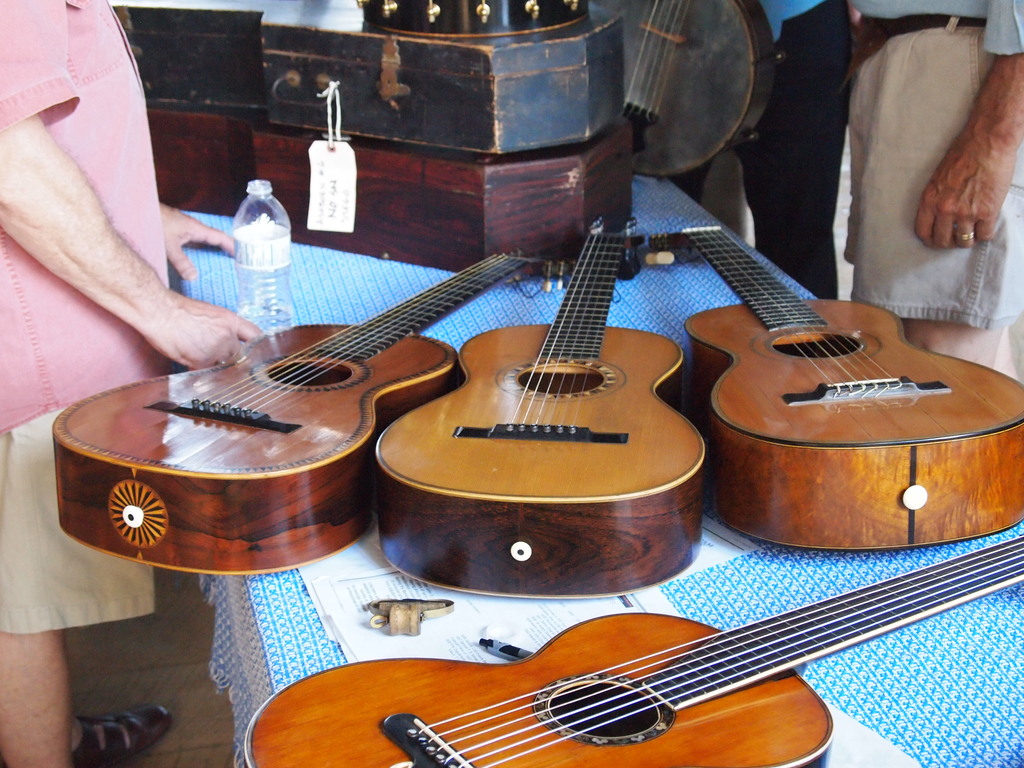 Oh, yeah, and an Ashford guitar.  I think that's also the only one... 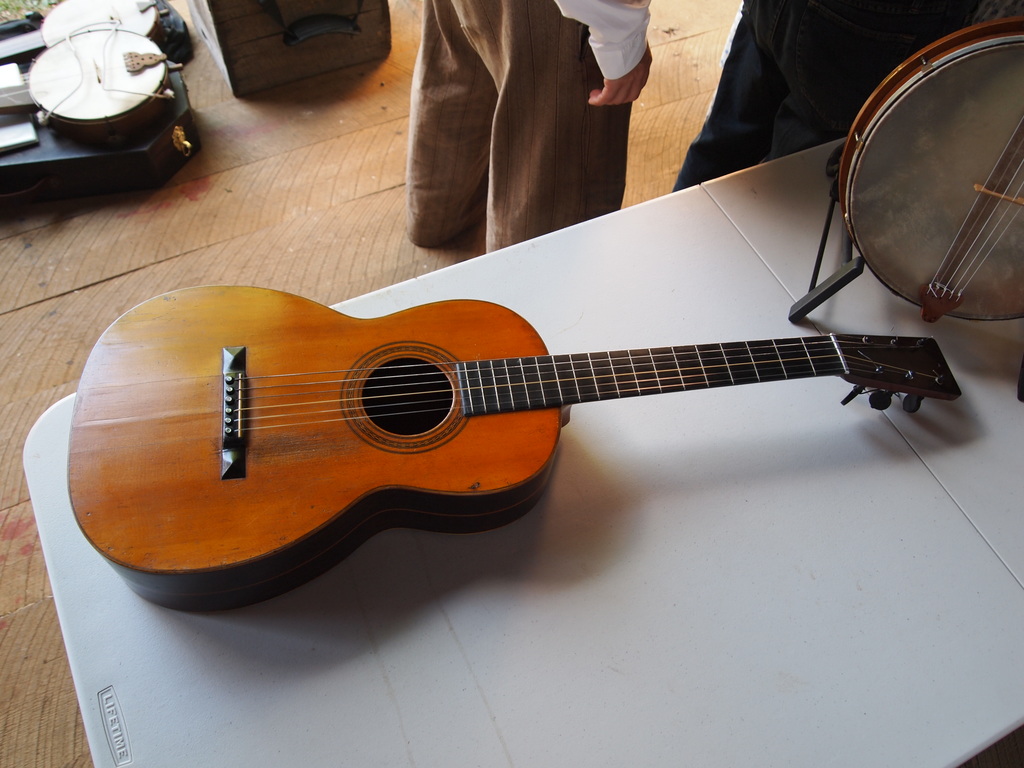 Anyway, you probably get the idea.  This afternoon there was a minstrel banjo concert in the Dunkard Church, elsewhere on the Antietam battlefield.  Both of my wife's maternal gr-grandfathers were among the minority of the 47th Alabama infantry regiment's members who survived the battle there.  We couldn't make it back today, but probably someone will have pictures from that event.  (In that the actual Dunkards didn't use instruments in church, and were pacifists, the concept of either a banjo concert or a battle there is a little bit jarring; but so it goes.)

Thank you! Are any of the Banjo's there for sale?

None of the 19th century original ones are for sale.  Jim Hartel had three of his on display, and there was one other apparently commercial setup with newly made period-appropriate banjos.  I don't even know whose display it was; maybe Tim Twiss brought stuff from his store?  Or maybe George Wunderlich has been exceptionally busy, lately?  It looked to me like the work of several makers.  I don't go to these events to shop for instruments I can't afford, anyway.

I am envious, I miss being there.  Not "Ashford" BTW, "Ashborn". Mine is an exact copy of Bob Winan's shown in the third pic down. I fell in love with the sound of Bob's...and Jim Hartel captured its essence in mine, which looks, plays and sounds like its twin.

Amazing that Pete Szego has piles of these things laying about. Even more amazing that he is willing to bring them out and let us experience them. Damn, I would have loved to see those early Martins.