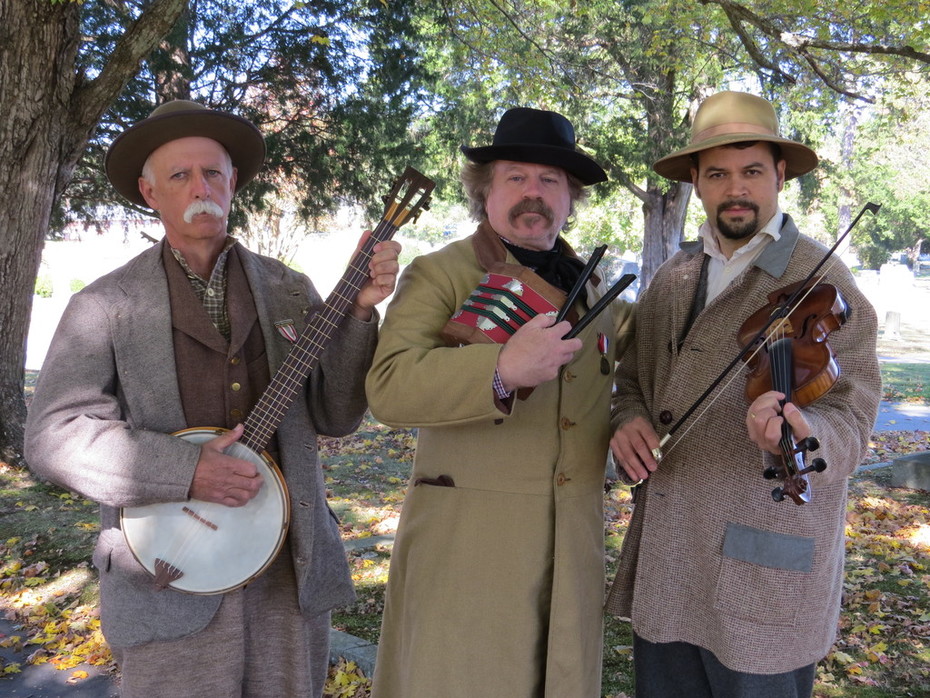 A fine looking group of musicians!

Mark, that's a nice-looking fiddle, too...what sort is it?  Do you play down on the shoulder?

Paul, it is a Maggini model made by E. Reinhold Schmidt in Saxony, circa 1905. I got it off former Bluegrass Boy Tony Ellis, whom I used to do some gigs with. He and John Hartford used to play it during some of their riverboat gigs together. Yes, I mostly play down on the shoulder.

It sure looks like a fine instrument; Schmidt was definitely a master luthier in an entirely different league from all those cheaply-built Saxon fiddles of the period.

I am curious about what the minstrel fiddle style was like.  I suspect that the driving rhythm common in a lot of Southern American fiddle music was introduced by African-Americans whose playing was influenced by the short bow stroke rhythms used in West African bowed lute technique, but I have no idea whether that influence dates back before the Civil War.  I have never encountered descriptions of minstrel fiddle style that really gave me a sense of how they played.

I don't know much about the West African bowed lute tradition, but Scottish fiddle music is full of short bowing technique.

Yeah, and the Scots have syncopation too, sort of like the piano right hand of that JW Sweeny thing you were showing me--I think that's why West Africans were readily able to adapt what they were already familiar with to the European violin, and the documentary evidence is filled with antebellum references to African-American fiddlers.  I think the phrasing differences between Natalie McMaster and Vassar Clements could be explained by the influence of African-American fiddlers, to point out extremes.  What I think we may never know is when that change started to occur, whether African-American fiddlers were already playing in a distinct way from European-Americans from the beginning--as I suspect they were--and when white fiddlers started to absorb this new style(s).  Did the minstrel fiddlers play sort of like New England fiddlers or was it more of an Appalachian sound?

I'd guess the minstrel fiddling was like minstrel banjo playing - there was probably a huge variety of sound. I'd like to explore the violin tutors of the period.

www.youtube.com/watch?v=fAKCki2uShA here's Uncle Am Stewart from Tenn. b. 1853

www.youtube.com/watch?v=TbPleeXEoBs and Jasper Bisbee from Michigan b. 1843

archives.irishfest.com/dunn-family-collection/Music/Cylinders4.htm Edward Cronin b. 1838 in Ireland and moved to Chicago as a boy,

Hey Mark, we need to get you a proper thimble!!!