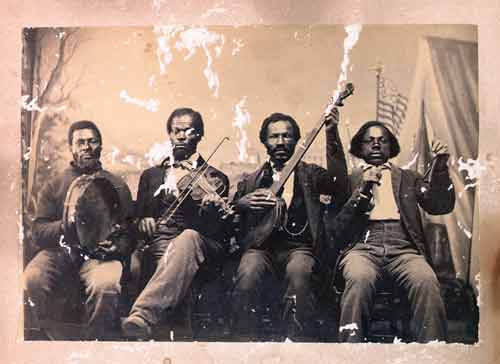 Would have given anything to hear what these guys could play.

Hey Terry Bell, check out the size of that Tambourine.

It reminds me a bit of:

I've seen speculation that the bodrahn was actually derived from the minstrel tambo.

Ok so check this out, Wes:

For a bit in the beginning, but then again very clearly at about 1:30 min, you can see the bodhran (tambo?) player using the thumb roll technique, which makes the jingles shiver.

Thanks that a good one.

Great footage. Very cool. This is another reason why I love this site, one thing can open the door to something else, or more information on how all this ties in.

There are linguistic references to the Bodhran going back to the 17th century. Most musical cultures worldwide have some sort of frame drum, so to think that Ireland did not have one before the 20th century hardly seems plausible. Now just when an instrument  becomes a session instrument is something different. For instance - guitars existed in Ireland for hundreds of years before they started to be played in sessions in the 1960's.

Dan'l I tend to agree with you, in fact one of the definitions given in this article is "a type of tambourine." I must admit I'm a bit intrigued by the thought that  the music flowed both ways across the Atlantic. Denis Murphy recorded a fine version of Turkey in the Straw  and Francis O'Neill included it in his music of Ireland.

Has anyone taken a serious look at how these big tambo's would have been played?  The big tambo's seem to show up a lot in old pictures and playbills from the period, but every time I watch a video of someone playing one I get the impression that they aren't quite sure what to do with it.  It would be interesting to have a serious percussionist take a look at one and see just what they could do with it.

In Irish music the Boudran is taken very seriously, but the big tambo's seem to be an a second class instrument, behind the fiddle, banjo, and bones.  Yet they were in all the early shows.

I am not a percussionist and would have never thought of using the thumb finger roll that Strumelia pointed out. Are there other techniques (from Irish or other people that use big hand drums) that could have or would have been used by Minstrel players?

The whole purpose of the 'thumb roll' is to make the jingles ring in an extended shivering way.  So doing that same thing on a regular bodhran or frame drum without jingles would probably not produce any effect to speak of.  Watch King Bennett of the Camptown Shakers do this masterfully- they have some great videos right on this site- and then go buy their CDs, if you haven't already!!   :)

Scott- I agree with you totally- there must have been some great minstrel tambo and frame hand drum players back then, we should look to current skilled drum players to imagine what might have been going on.  I'm sure it was way more complex than this: http://youtu.be/hJpZnAXrRWo

I think a lot about that when I see shots like this....trying to imagine the dynamic of the group with that big tambo and jingles, the hard shoes beating time on a wooden stage, big deep banjos thumping, bones clanging with an echo, and deep resonant singing. I think it is something just beyond our experience to grasp.