The Trials of an Early Banjo Enthusiast

The mention of Harpers Ferry in a recent post brings to mind a little incident that I would like to relate here as an example of the trials and tribulations sometimes endured by the modern day “Early Banjo Enthusiast.”

In the fall of 2011, Mark Weems and I attended our first banjo gathering together at the Harpers Ferry event hosted by Greg Adams.

In order to save a little money, we rented one of the three small rooms nestled in the attic of an old home that was constructed in 1844. It was listed as a bed and breakfast, but also served as something akin to a hostel for weary hikers on the Appalachian Trail.

The room was 6 feet wide and about 12 feet long and furnished with one chair, and a set of bunk beds that rose perilously close to the steeply sloping roof.

Mark, being somewhat younger and more agile, but still not large enough or mean enough to whip my butt, was selected to dwell upon the top bunk.

After a most enjoyable first day at the event in the old train station, we joined a group of fellow “Early Banjo Enthusiasts” at an old tavern where we made music until sometime after midnight. Tired but happy, we walked back to our sleeping loft talking excitedly about the day’s experiences and blissfully unaware of the misery about to befall us.

For those of you who don’t know, the “old town” section of Harpers Ferry is located on a steep declivity at the confluence of the Potomac and Shenandoah rivers. Two railroad lines also converge and cross the Potomac River at this point, both operated by CSX Transportation.

Almost every hour on the hour, all night long, freight trains would cross the river bridge and rumble by within 100 yards of our abode. They would always travel in groups of three (I counted) blowing their horns as each engineer vied with his companions to blast the weary inhabitants of Harpers Ferry out of their previous 45 minutes of fitful slumber. Laying there in the cold attic, now dimly lit by the headlights of approaching trains, the window vibrating merrily, I remembered making the remark at the tavern that the town looked somewhat deserted after dark.

Now, Mark is a heavy sleeper. At first, when the trains would pass with horns blasting he would just roll over suddenly causing the entire contraption we were laying in to shake violently and lean as if about to heel over. I found this easy to deal with, as I was already awake due to his snoring. Around 3 o’clock in the morning a particularly loud blast from one of CSX Transportation’s newest locomotives startled Mark into semi-consciousness and he sat straight up in bed. The resulting thud from the violent collision of Mark’s cranium with the 168 year old pine sheathing boards was loud enough to awaken everyone in the 11-room inn, but I was only aware of a confused low murmur emanating from the adjacent rooms occupied by our fellow sufferers. But being wide awake, I was not the least bit bothered.

At approximately 4 a.m. the damnable trains running on a near perfect timetable once again made their unwelcome intrusion upon the tired hamlet, and once again Mark, not remembering where he was, sat up.

In my 61 years of life I have been privileged to hear some powerful, imaginative, heartfelt cursing, but the chorus of expletives that arose from that tortured attic almost defies description. Mark roundly cursed everything from the trains down to the bed, and with admirable furor, I might add. The British couple in the room to our right joined in with their own rather vulgar opinions, their accents lending a certain melodious quality to words I had heretofore found rather disgusting.

But the highlight of the evening was listening to the volume and energy behind the cursing that emanated from the room occupied by two female hikers from Germany, whose voices soared and hovered above the cacophony. I speak very little German, but pretty much got the gist of their rant, because while they shouted to each other in German they cursed in English, “S.O.B” being one of their especial favorites.

By this time I was getting a little nervous concerning my situation and decided to get up and take a shower in one of the two bathrooms serving the entire 11-room inn. Although I did not sleep more than 10 minutes the entire night, the cold shower left me feeling quite refreshed. I then slipped quietly out of the house and waited on the steps of the adjacent bakery until it opened at 5 a.m. I loitered around the bakery eating scones and drinking coffee until 7 o’clock, when I decided to take a hot cup back to Mark, knowing that he would need to get ready if we were to make the 8:30 banjo session.

Imagine my surprise to discover that he was angry about my disturbing him at such an early hour. To this day, I believe that this one lamentable incident is the source of Mark’s rather belligerent attitude whenever I dare to mention his infernal snoring.

James--Gee, really sorry I missed that one. Sounds like great fun.--Rob

Rob, Harpers Ferry is a beautiful and historic old town. Greg's "Banjo Gathering" was absolutely wonderful! But, I believe that most of the participants were staying in Charles Town.

I'm bringing my earplugs next week, just in case. 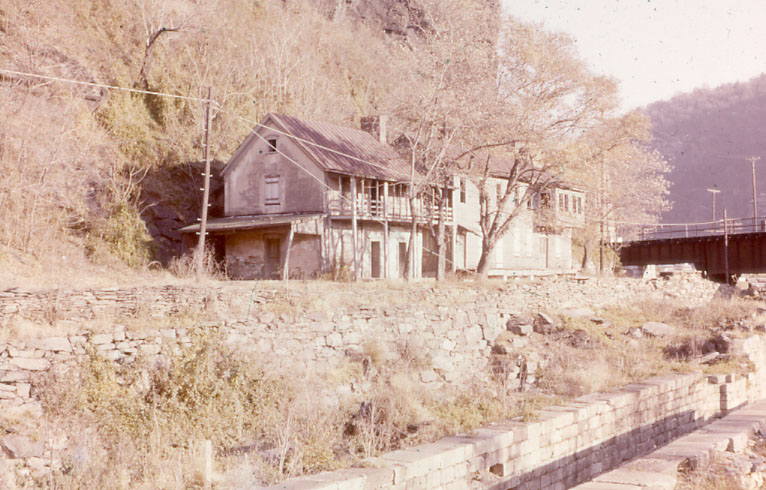 Wes--That's a great photo. Harpers Ferry really is an amazing place. So much history and so many well preserved structures. I will never forget that bridge!

If you climb to the rocks overlooking the tunnel you can still see the names of several soldiers from the 13 Mass. Co. K carved into the stones. It was also the first stop of Meriwether Lewis on his historic expedition. This is me and my Buddy Slim there about in the recruiting office about 1973. 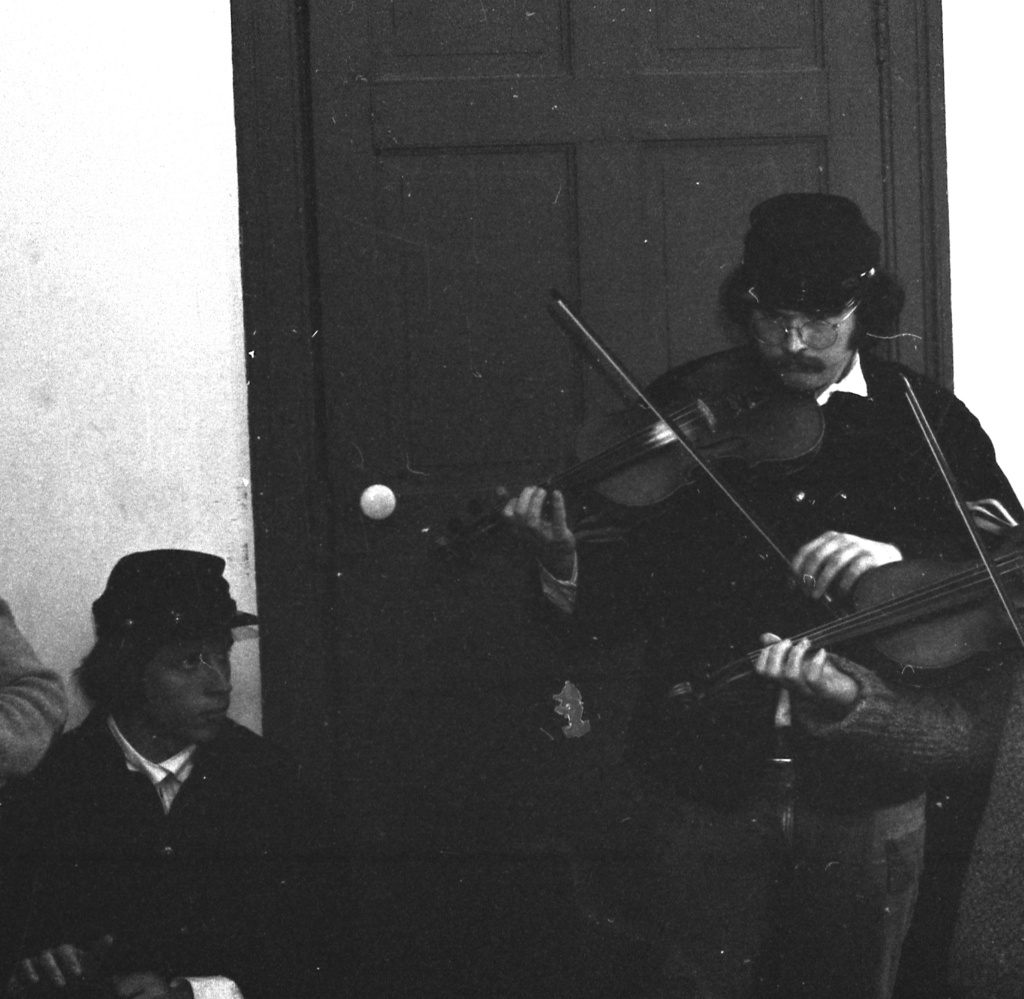 Valerie- I told Mark that if I posted a few more accounts of our travels/travails that it might make him famous, or at least infamous. He fails to see the humor. So, is it more important to try and maintain a rather tenuous friendship with Mark, or satisfy the public's desire to know more of the intimate details of his peculiar existence???