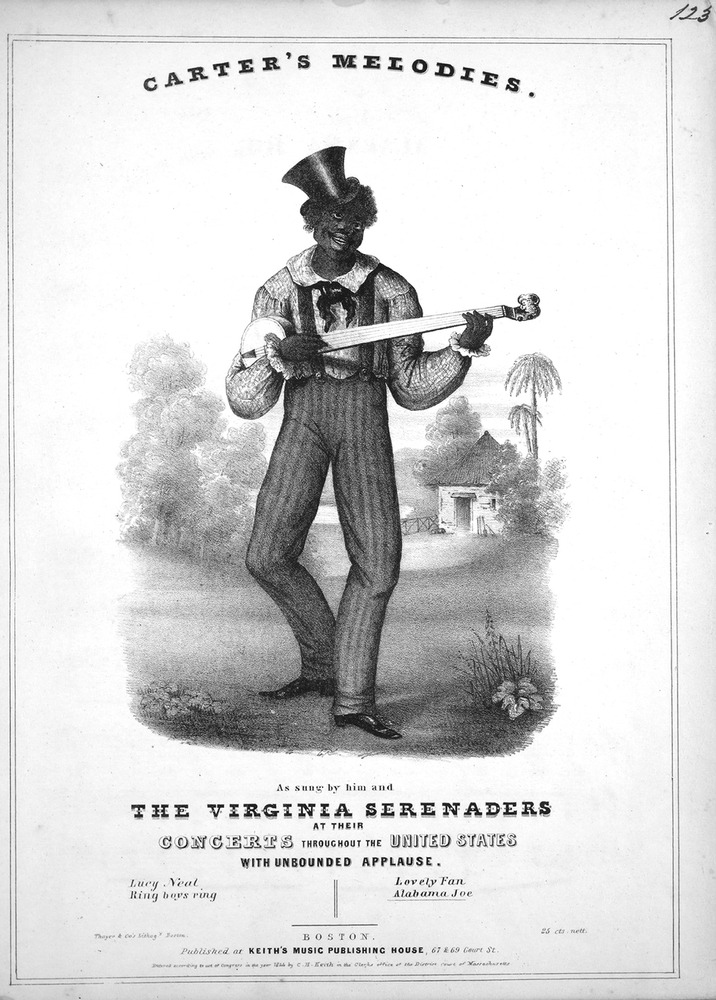 Well, I'm not an African Historian, but I know that different peoples from very diverse areas of West Africa were brought to various areas of the America's. I would think that they would bring with them very diverse musical and instrumental traditions. I'm always amazed at the difference between Ngoni playing and Akonting playing for instance, and they are both considered possible early banjo prototypes.

You would think there would be at least....one? These are hoops we are looking at. Perhaps if Sweeney is the singular example his secrecy may support the imagery.

You would think there would be a few surviving, yes.  However...are there many home made American hoop-tambourines surviving from this time period?   I think the earliest surviving dated American-made Appalachian dulcimer was from 1832, and was strung with metal strings.  Being a wooden box with no long thin neck and no gut strings, open hoop or skin membrane, and more likely used for hymn and ballad singing rather than entertainment, work or dance accompaniment, I imagine the 1830s box dulcimer was better equipped to survive the ravages of time than the more structurally vulnerable banjos made at the same time.

One could theoretically take a normal string and then merely fasten a tiny under-string capo halfway up to act as a nut or pip for that string and effectively raise the pitch by a large amount.   I guess you'd just need to avoid the 'dead' part of that string with the left hand.

Doesn't seem like an ideal design, but maybe somebody did that at some point.

I'm suspecting that researching the viability of banjos without a short thumb string is not particularly relevant to Minstrel stage banjos or factory banjos, though perhaps it's relevant to the study of folk instruments.

Do we know everything about the banjos that the earliest minstrel stage performers were using?

And yet they left it off of the cover of the 1872 Converse book too.

Possibly, some artists could of course err. I'm currently examining the pictorial and verbal record 1840 -1848, remembering always that exceptions don't prove a rule.

A. This is the work of aliens, or  B. The artist was high, or  C. This is not a banjo, it's a bass. You didn't think Leo Fender got his ideas from a concert double bass did you?

Joseph, not only possible, but to my mind, highly plausible. A cursory study of the physical development of the guitar over the course of two hundred years should cue us in as to how many different characteristics an instrument can take on before it is finally stabilized, usually under the hands of a master player. Dena Epstein's book mentions Sir Hans Sloane's Jamaica account from 1689 has "they (Negroes) have several sorts of Instruments in imitation of Lutes"(pg 29); Le Romain in 1768 speaks of two kinds of "banzas" with four strings (pg. 31);Hans Nathan writes that the 4 stringers (no thumb string) remained dominant through the 1840's (pgs. 126-128, 153) and the spine on the dust jacket of his book even shows a four string, no thumb stringed instrument!  Also, the pictorial record upholds this idea. Also, the historical verbal descriptions of four stringed banjo's (Epstein's book has many of them) are not clear about whether they had a thumb string or not. And yes, the Sweeny sheet music from 1840 and Howe's Banjo Preceptor can totally be played without a thumb string in a more melodic style (I have several videos up demonstrating this). The thumb string can, of course, be implemented to create more of an open string, wild sound, which we are more used to hearing on the banjo today.

This reminds me of paintings from the Renaissance that depict lutenists.  Even though many of these paintings are highly detailed and realistic in style, the instruments are not accurately depicted (as well as the players right-hand technique).  The artists were not musicians are were both ignorant of how the lutes were constructed and how they were played.