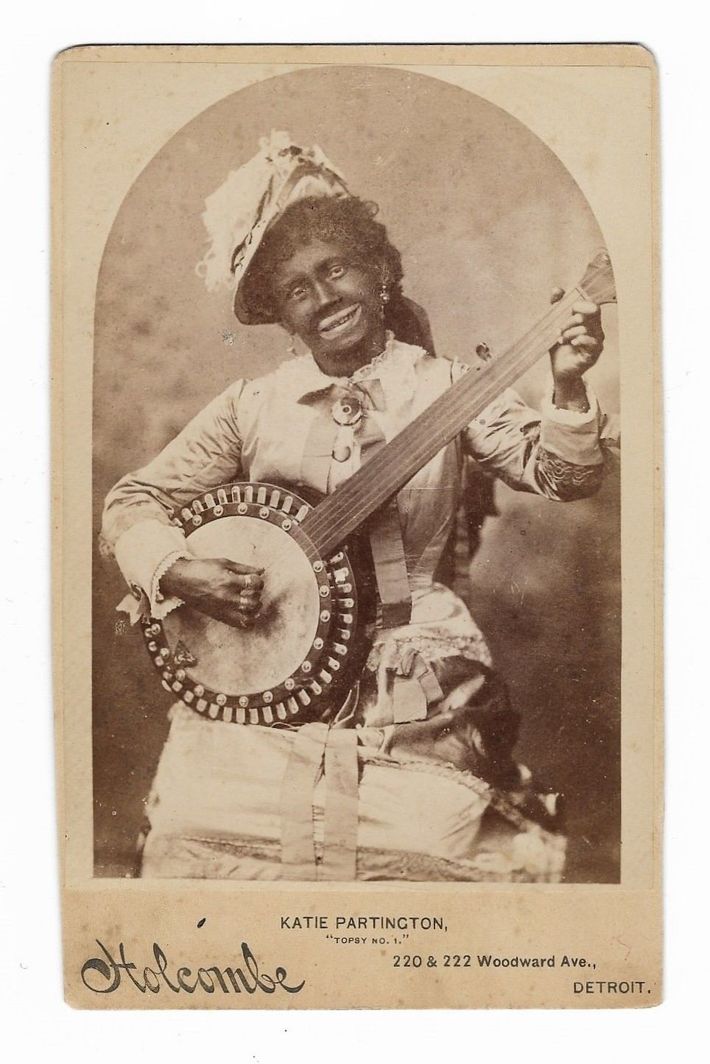 Here's an interesting cabinet card that I recently acquired. I thought initially that Katie Partington might be a minstrel performer. It turns out, however, that she appeared in a production of Uncle Tom's Cabin the 1870s and later toured as "Topsy" in a one-woman show based on UTC. The photo dates to the 1880s.

Very cool image and the best scan that I have seen of it!  Thanks for shearing!!!

She was a minstrel.  Let me explain.

By 1870 Uncle Tom Cabin shows were just themed minstrel shows.  Same acts, jokes, songs and routines but themed and in costume from Uncle Toms Cabin.  The normal skits were replaced by key scenes from UTC like Eliza's crossing the river (complete real hounds) with "ice blocks" on a moving belt that she jumps from one to the other. The scenes would lead into song, sometimes written for the show but most of the time they were just minstrel standards that went with the scene.

The use of the old style closed back Dobson was likely part of the act. They were still being made in the 1880s by Martin Brothers Guitars (not "that" Martin) and were an "old fashioned" banjo.  Remember, UTC was a "period piece" even in the 1880s set in pre America Civil War times.

I have always assumed that the reason tack head and early style fretless banjos continued to be made and sold up to 1900 was for theater and UTC shows as well as minstrel acts of early formula (yep, there were still acts doing the tried and true formula well into the 1900s).

What is funny about the photo is how classy Topsy is dressed!  Rings, fancy banjo, silk dress, ribbons...  That is not the Topsy from Stowe's book!!

Thanks, Joel, for adding more context to the photo.  It's a striking image, though disturbing in many ways