This is one of our favorite old time murder ballads! 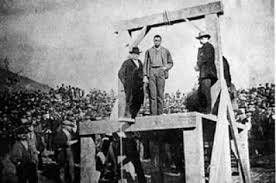 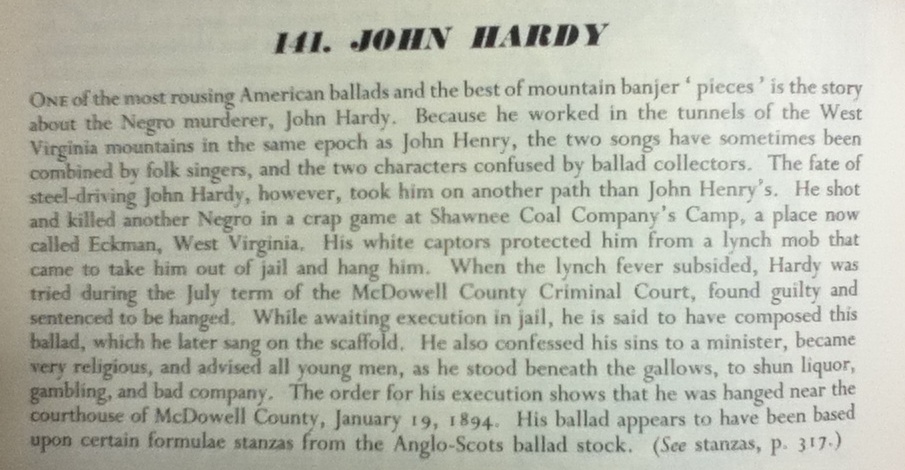 Sounds good in the minor scale

A suggestion: try playing this in the G modal (sawmill) tuning but form the chords necessary to play this in F. I've been playing it that way for years and it has broader melodic range when played in (F).

I like Cedric Watson's version too, a bit more bluesy and melodically more modern a tune as a result.

"Prohibition is a Failure" also sounds good in this tuning. I know its not 'Minstrel' but I also like the idea of using older configurations of the banjo and older forms of it's music when playing "modern" banjo tunes. Mike Seeger played a bluegrass tune with a fretless (I think it was "Head over Heels in Love").

The REA (Rural Electrification Agency (Association?) was one of those FDR "salvation" projects of the Great Depression, bringing electricity to remote areas of the Southern mountains. Appalachia was thereby exposed to "modern" music (and as a result modern music was exposed to the Appalachian traditions). The enthusiasm for electricity was mixed.

In the film Oh Brother! Clooney makes an impassioned claim about the coming of electricity which sounds a lot like the promotional statements made by the REA at the time.

Here in Missouri (and Arkansas) electricity arrived at a later date. The Ozarks have a similar music tradition as Appalachia but it was less influenced by radio and the later arrival of electricity (and radio reception as a result) is credited (or blamed) with preserving those traditions longer. I personally know of a family (of a retired lieutenant of police in Cuba, Missouri) that didn't have electricity until 1957!

Some music from the Ozarks is notably different from Appalachian music. There is a collection of music from the Ozarks, "I'm Old But I'm Awfully Tough", a 3 LP set with extensive notes which was assembled in 1970 (I believe). It includes the playing and singing of music from the French settler's traditions, some examples of which come from the Old Mines, Potosi area of Missouri. I have a copy but the album is "out of print". There might be a CD version available on the internet.

Vesta Johnson is featured on the album and she still plays (and teaches) fiddle locally. Frankie Hayes and his sister Deedee Love (at 86 plus years of age) still perform regularly. Idabell Brandt was performing in the Franklin/Gasconade counties area until recently due to some health issues. She plays banjo in the traditional stroke style. She also plays autoharp.

Because the Ozarks were settled later by folks from Kentucky, Tennessee, and other parts of the South there seems to have been an assumption that "Ozark music is the same only not as good so why pay attention to it". All attention is focused on Appalachia and the Cumberland plateau. The music commonly played by the folks I mentioned is typical of what has been played in rural America. Not much in the way of flashy or virtuoso performance. Common dance tunes and many "brush arbor" songs. What people attending the Steam Tractor show in Rosebud, Missouri want to hear. 'Handmade and old line' music is still here. An old guitar and harmonica playing friend's favorite tune was Darling Nellie Grey.

I suggest a visit to Mountain View, Arkansas and especially to the Folk Life Center. Mountain View has "parking lot jams" going on all over the town all the time and in a city park established just for sittin' and pickin'. Such experience might well shift attention from Galax or other Old Music venues of the South. No booze, though. Stone county, Arkansas is still dry!