OK, this is way off topic, but this was a VERY popular instrument on the East Coast, USA, during the early 19th-century. Sometimes called the English Guitar, its first publication comes from Edinburgh in 1758, and is full of traditional tunes, including these three. It was the sound of plucked strings while the banjo was embedding itself in America. Just thought you might like to hear it. It eventually died out when the so-called Spanish guitar arrived on the scene. It is tuned CEGceg (bass to treble), although I have it tuned a tone lower. My instrument dates from 1760, and has a 'watch-key' tuning mechanism.

Thomas Jefferson famously noted (can't grab the quote at the moment) that the banjo was tuned like the "lower three strings of the guitar"...and we know he played the English guitar. Many postulate that the banjo was thus tuned eCEG (early examples had only 4 strings).

I don't find this off topic in the least!

Comment by Rob MacKillop on August 24, 2009 at 1:36pm
Well, that is interesting. One of the Founding Fathers was a geetar player who knew the banjo. I would not be surprised if the tuning was the same. The guittar (as we call it here - not the 'English' Guitar) was hugely popular in Scotland. I've found about a dozen or so publications and 6 manuscripts in Scotland. I gave a talk about it at a conference in Portugal (the academic papers were published in a book), where I met Doc Rossi, who had done similar research on the guittar in Colonial America. Fascinating stuff. It was used on Scottish plantations, so it might well have had an influence on the tuning. The songs accompaniments look very similar to those found in the banjo books, and a few 'negro songs' appear here and there.

Comment by Trapdoor2 on August 24, 2009 at 2:38pm
Jefferson's quote from 1781: "The instrument proper to them is the Banjar, which they brought hither from Africa, and which is the original of the guitar, its chords being precisely the four lower chords of the guitar."

Comment by Trapdoor2 on August 24, 2009 at 3:25pm
Now I'm wondering: what opportunities would a banjo player (likely to have been a slave) have to hear the guittar played in 18th C America? I mean, were these typically played privately or down at the coffeehouse/tavern or on the village green or what? I wonder if slave-owners fostered musically inclined slaves out to 'learn the rep'.

I imagine the guittar is a bit on the quiet side, how does it compare to your gourdy?

Comment by Rob MacKillop on August 24, 2009 at 3:41pm
About the same volume as the gourd, but obviously very different.

It might not have been a slave...a white guy could have played the guittar and then picked up a slave's banjo and retuned it. But we have entered the world of fantasy. Better leap out of it asap.

Comment by Trapdoor2 on August 24, 2009 at 9:48pm
Wow, very cool!! Really a different sound there...very "dulcimer-like". Thanks for putting this video up, I think it is important that we hear what 'other' musics were available to people of the period.

Oh, and thanks for the close-ups. Interesting tuning device, I'd like to see some clear photos of the system. Amazing that it has survived in such good shape. 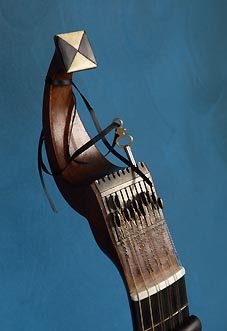 The strings have loops at either end, and therefore have to be an exact length. It is the most accurate tuning system I've ever come across, old or new. Unfortunately the neck is warped, so the subtleties of the tuning mechanism are lost somewhat. What I failed to show are the holes in the fingerboard/neck for a capo which was attached with a butterfly screw...

Very neat system. Thanks for the pix. Two modern electric guitar companies produce evolutions of this concept. Floyd Rose Guitars' "speedloader" system uses 'fixed length' strings and a cam-type of stretching system that is calibrated (with the specially made strings) to be 'on pitch' when loaded, there are fine tuners to get the tuning spot on. Steinberger also uses a similar system of tensioning with fine tuners. With both systems one can totally restring the guitar (immediately in tune) in about 30 sec. Probably a big help onstage!

I saw the holes in the neck in your video and assumed they were for a capotasto.