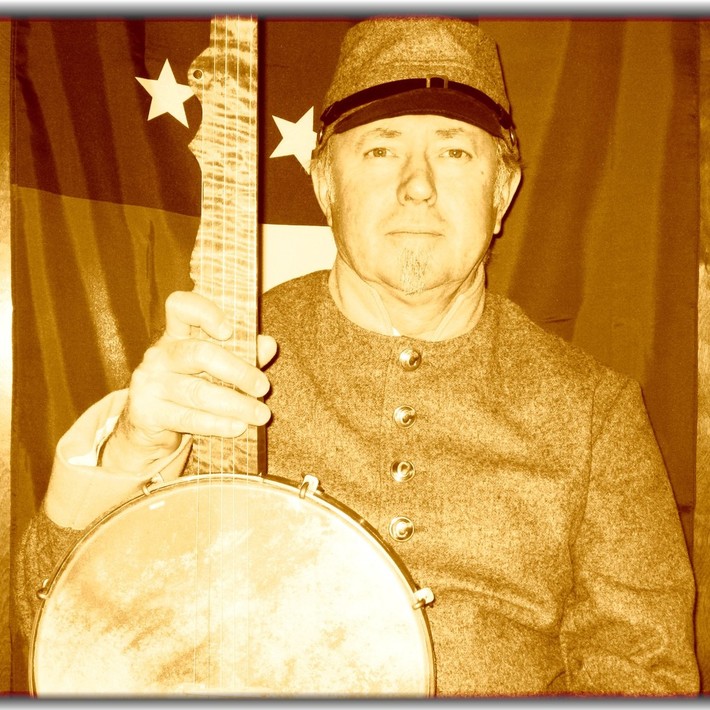 Bob Welch-Songs of the Civil War

"Songs of the Civil War " is a program of music, history and storytelling designed to both entertain and inform, while appealing to all ages.

My sincere thanks to the Camden County Library District, Osage Beach and Camdenton, Missouri libraries and their patrons for hosting the Songs of the Civil War on November 8, 2014. I hope ya'll enjoyed it half as much as I did!

In 2014, for the eighth consecutive year, American Trust and Savings Bank of Dubuque, IA sponsored Songs of the Civil War programs in Tri-State area schools.

On the left side of this page, click on "Blog Posts" for newspaper features and testimonials regarding the Songs of the Civil War program.

Bob performs songs of the Civil War period, singing and accompanying himself on guitar and banjo.Bob combines storytelling and history with the music. The songs of the 1860's literally bring history to musical life.

Bob and his original song, "The Ballad of Jennie Wade" were honored in the "Song of the Year" songwriting competition and featured in the national magazine, "The Gettysburg Companion."

"The Songs of the Civil War/Billy Yank & Johnny Reb" program visited more than 20 schools in the Dubuque, and tri-state area in 2009 and 2011, sponsored by the Dubuque Arts Council's Artist In Residence Series.

The Ballad of Jennie Wade

Battle Hymn of the Republic

How did you find out about Ning Minstrel Banjo?
I was searching for information on clawhammer technique after purchasing my first Prust banjo.

How long have you played banjo?
Since 2005

What kind of banjo(s) do you own?
Deering and Prust

“Thank YOU, Bob! You were certainly a great fit for our museum . Best to you, Linda.”

Songs of the Civil War in the Classroom

“Bob Welch’s “Songs of the Civil War” performance was a treat! Bob kept them engaged and kept the questions coming, helping our students to remain involved and to delve even deeper into our country’s history from a fresh perspective. I would recommend this program to any teacher looking to bring an enlightening and entertaining discussion to their classroom.” Kim Forbes Taft Alternative Middle School Cedar Rapids, Iowa

“Your program was most enjoyable. If history teachers could present like you, we would have more kids interested in history! Great program!”   Cedar Rapids, IA. Public Library

Spirit of the Civil War

“With these songs one can feel the “spirit of the Civil War” and an amazing connection Bob Welch has with the Civil War. If reincarnation is a fact, then Welch experienced all of the war, for his songs are filled with a reality of the times.” Ken Allers Jr. Co-author of “The History Buffs Guide to Gettysburg” and "The Fog of Gettysburg".

“You were a great asset to our show... I heard from several people that said you were their favorite part of the weekend.”     Mike Faivre-Polo, IL. Sesquicentennial Chairman

The Board Members of the Dubuque Arts Council are very appreciative to have had you as our Artist in Residence. From the evaluations and comments we have received from the schools, you have done an excellent job for us. The board members were thrilled by your performance and by the response of the teachers and students during your performance.
Thanks again for your excellent program.
THE DUBUQUE ARTS COUNCIL

(The Songs of the Civil War/Lincoln & Liberty Too…

"Ya'll are gonna want Goober Peas on your IPods aren't you?"

Thank you so much for coming...We all enjoyed it. I've had many
compliments from teachers and students... We had to sing Goober Peas
again during 2nd grade music this afternoon.
--Patty Griffin Music K-4 Manchester, Iowa Lambert Elementary