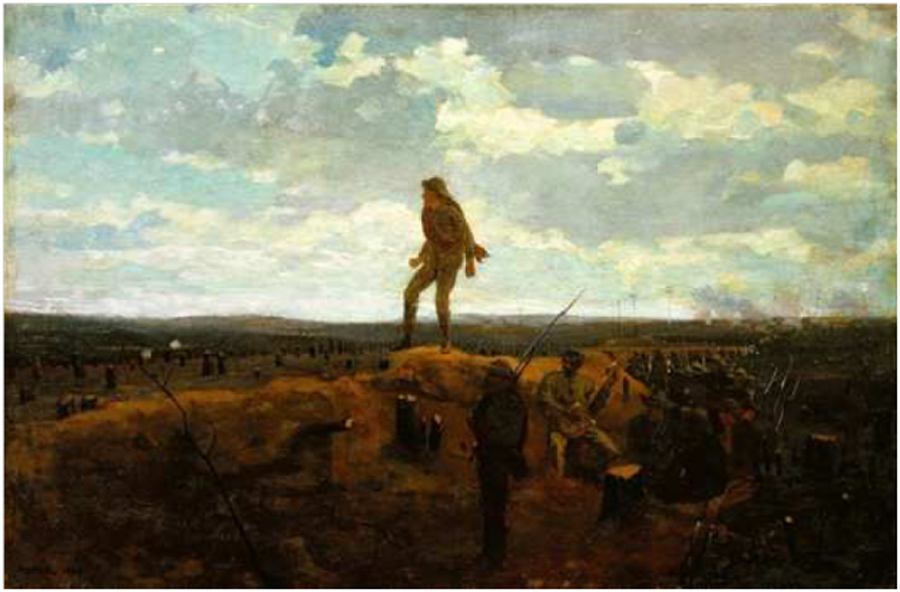 The men in the foreground are Confederates. The "sash" across the bodies of the "inviter" and the "sentry" are blanket rolls. In lieu of a more cumbersome knapsack, Confederates earlier on in the war began to roll their few bare-necessity articles in a blanket or tent shelter-half and sling it over their shoulder. The gray uniforms would have been of varying shades; often a darker gray or the blueish "cadet or Charleville" gray could be mistaken for Union blue in dim light or at a distance. The lighter colored slouch hats are significant. Hats, rather than caps, were the favored headgear of Confederate soldiers. The black slouch hat was also the favored wear of Union troops in the west, but the dark blue forage cap remained favored by federals in the eastern theater, Petersburg, VA, in this case.

That the banjo player is wearing gray does not necessarily indicate that he is wearing military clothing. The fabric used most often for Confederate uniforms was a mixture of wool and cotton known as "jean's cloth." It was the precursor of our now-familiar denim cloth. "Jean's cloth" was a cheap substitute for 100% wool. It was so commonly used to clothe slaves that it was also actually called "slave cloth." So, this rough cloth, dyed with the natural colors that would produce various shades of gray, actually predated the war. On the other hand, non-combatants on both sides were usually clad in a hodge-podge of whatever garb was available -- surplus military uniform articles from either side, civilian pieces, in infinite combinations.

Black men were present with the Confederate forces throughout the war in every imaginable capacity. My interpretation is simply that Homer knew this, even if he were not depicting an actual incident that he had personally witnessed. The theory that this is a white man in black face in the front line trenches is implausible. I do not see his depiction of this man in any negative light whatsoever. Maybe Homer was indeed recalling an actual scene of his personal experience, and he has simply accurately recreated what his mind's eye recorded. If it is more of a composite of his imagination, I interpret his depiction of the negro as very dark as to leave no misinterpretation as to his racial identity. "Yes, black men and women were involved in all aspects of this great conflict. They saw it all, did it all, and can tell it all."

Thank you, Bryant, for your knowledgeable comments on the painting.

Great reading of the clothing clues.   :)

I enjoyed this thread. Makes me want to drive over there and see it.

One other comment... Why would the depiction of an African-American with dark skin and a broad nose and full lips be depicted as negative? This is somewhat surreal. I believe that most of us in this community are old enough to remember the civil rights movement of the 1960s -- in particular the "Black is Beautiful" facet of those times. I don't see Homer's depiction of this man to be in any way negative. My question is, who is actually being racist here -- Homer, for accurately painting the features of an individual black man, or the viewer, for interpreting such features to indicate some personification of inferiority? If we're going to follow that degree of misplaced hypersensitivity, I, as a North Carolinian, could just as easily be offended by the picturing of a Southern man as the stereotypical, mindless, self-destructive rube.

No, I don't see it that way at all. I think Homer showed his genius in bringing the interminable impersonal horror of siege warfare, down to one improbable personal, even amusing, moment in time. I wish he had painted the reaction in the Union trenches. It would not have been unlikely that they would have been manned by African-American soldiers of every imaginable hue and countenance. How would we expect Homer to have depicted them?

Why would the depiction of an African-American with dark skin and a broad nose and full lips be depicted as negative? This is somewhat surreal....I don't see Homer's depiction of this man to be in any way negative. My question is, who is actually being racist here -- Homer, for accurately painting the features of an individual black man, or the viewer, for interpreting such features to indicate some personification of inferiority?

Ok, call me nuts, but I have to say the cartoon-y depiction of the banjo player's face in Homer's painting is nothing like anyone I've ever seen in real life.  How can I look at it and not see a negative stereotyped depiction?  Perhaps homer's intent was not negative, but the stereotypical imagery is pretty obvious.  Everyone else in the painting looks like an realistic human being.  The banjo player's exaggerated rolling eye whites, giant pink balloon lips going all around in a circle, knobbly 'wool hair'... all strikes me as more like something from Spike Lee's "Bamboozled" than anything else...

My initial inpression was that the dancer and blacked-up banjo player were "putting on a show" for their comrades in the trench, and at some point during the dance the whiskey and/or testosterone kicked in.

I agree with Strumelia's earlier observation that this painting looks to be unfinished. In the very useful close up of the banjo player and the soldiers close by, the

face of the soldier immediately to the right of him definitely is unfinished. Basically all we can see are his bulging eyes. The soldier standing at support arms to

Perhaps other works by Homer can give more concise evidence regarding his attitude about people of African descent. There is an excellent gallery of his works at

http://www.canvasreplicas.com/Homer.htm Among the most relevant images would be Gulf Stream, After the Hurricane, Visit from the Old Mistress, Contraband, Army Boots,

Many of these images I had never seen before, so I feel blessed to have been exposed to this discussion to stimulate my curiosity about Winslow Homer. Now I'm

motivated to study about his life.

BTW, for whatever it may be worth, I showed my 7-yr-old biracial grandson all three images of "Defiance" and asked him about the close up, "What do you see?" "A man playing a banjo." "Do you see anything unusual?" "No." Admittedly, he would have been more engaged if it had been an image from Star Wars or Iron Man, but there you go. Of more relevance to this ning, his three favorite songs are "Camptown Races," "Old Joe", and "Who Let the Dogs Out?"

Well, my two cents:  We can learn most from the title, time and place.

Of course, then you look at the title, staing "BEFORE Petersburg".  There were many assaults to the Confederate lines, including the most famous, "The Crater".  OR does he mean "before" as in "in front of" IE "He stood before me" or "He stood before the entrenchments" sort of statement.  I'm inclined to the later.

The guy on the berm is a (and I hate to say it) "typical" Confederate soldier.  He's wearing a blanket roll around his chest, looks like boots.  His hat is turned up in the front, but not in the back, I've seen this before.

So, banjo player.  Fact of the matter is that black folk did serve in the Confederate forces.  I disagree that the fellow in this painting a Confederate uniform, it's too tough to tell.  Just because its gray, doesn't mean its Confederate.  Blacks served many functions in both armies, including personal servants to their masters.  This guy could be MANY things.

Lumping it all together:  Seige going on, waiting things out; banjo dude probably just playing to play and while away the hours until something happens; the other soldiers in teh background confirm this "waiting game" just sitting under arms waiting on another potential attack; guy randomly leaps up onto the top of the entrenchment due to frustration; caught banjo player off guard and he looks back and upward since the guy probably ran right past him.

Again, my two cents.  There isn't a whole lot of details to the banjo.  If you look at other Homer sketches and paintings, it's his style; quick stroeks of pencil or paint to capture the moment.  He wants us to concntrate on the guy on top.  He probably put some detail, such as the eyes on the player simply to give him some life as otherwise it's a black smug as are the faces of the soldiers.

Whoops, didn't see all of Bryant's great input before posting, just went off and wrote! haha  Good stuff Bryant, we agree on details :)