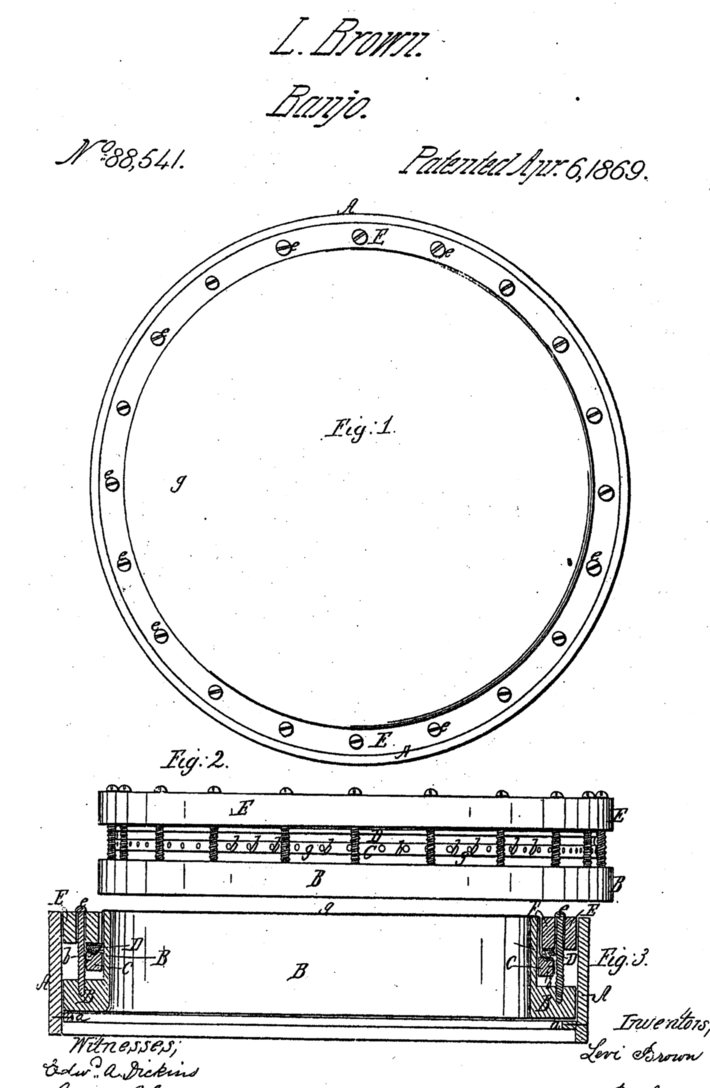 For comparison with banjo in Joel Hooks' photo of Nelse Seymour.

Interesting, it is an elaborate mechanism for tightening the "parchment."  But, according to the patent, it is still a tack-head banjo underneath.

Joel and Bob--Thanks for the patent document.  I read it and I would guess that the reason this invention didn't take off like wildfire was that it tended to tear the heads, especially if tightened too much.  With a conventional tension hoop, tightening puts the pressure mostly on the flesh hoop which is made of metal (though inside a skin sheath).  With this apparatus, all the force is transferred through a narrow groove onto the skin, amplifying and focusing the forces at work to a small area of a relatively fragile material.--Rob

Joel and Rob, at the risk of being too picky, I have to disagree with you. To get the best view of the patent drawing, not only should one click where it says "View Full Size," but while holding down your ctrl key, press the + key about 8 times to make the image enlarge to fill the screen, and look closely at the left side of Figure 3.

Regarding the tacks, yes, they are suggested for use deep inside the mechanism to attach the skin to the side of ring C, the equivalent of what is normally called the "flesh hoop," as Rob points out. However, a true "tack-head banjo" lacks the ability to adjust the tension of the head once it is mounted, which is not the case with Brown's design. So, in that sense to call it a "tack-head" is misleading. And Brown is not dogmatic about the tacks, adding "or other suitable means."

Rob, I think you are right that Brown's design did not catch on, but not for the reason you suggest. He notes that the flesh hoop C will have along its top side "a rounded groove" in the form of a semi-circular concavity. A matching semi-circular convex ring above it (either a separate ring D or as part of the structure of the tension hoop E) will press the skin into the concavity in ring C and then further press down C, tightening the head. I actually think this arrangement would minimize the possibility of tearing at the tacks.

One feature that I think would have made this design less than ideal is that the screws to tighten the head (envisioned as wood screws since they seem to come to a point) get their "traction" by screwing into ring B. How many times of tightening and loosening the head, or replacing it, would it take for the threads in the wood of B to become stripped? H. C. Dobson also tried this "screw into wood" mechanism in his 1873 patent banjo, which I also think was not a success for the same reason (I know of only one or two surviving 1873s whereas surviving HC Dobson 1867 and 1878 patent banjos are fairly common. But the biggest reason that Brown's 1869 design did not last, I believe, is its lack of ease of manufacturing. Making this banjo would have been a complex process, a failing shared by many of the banjo designs patented up through, say, the mid 1880s. Why such complexity? Well, one of the major, not the only but the major, concerns of those patenting banjo improvements up to 1880 was getting rid of those pesky outside-the-rim bracket head tightening systems, apparently largely motivated to make the banjo more acceptable to women (won't tear their dresses). Of the 21 banjo patents from the first in 1850 through 1880 that involved the design of the rim/head tightening system, 17 had no external brackets. Lots of clever innovation, but not always practical from a manufacturing standpoint.

My apologies for more detail than probably anyone wanted on this topic.

Bob--As always, thanks for your insight into these important matters.  As a related  aside, one of the Dobson's who was a female Dobson, Mrs. Minnie Dobson to be exact, got her new device for protecting your clothing from the offending protuberances inherent in external tightening devices into Scientific American, such was the great import of these advancements.  You can't make this stuff up.--Rob

Comment by Joel Hooks on February 6, 2013 at 6:55pm
Bob and Rob, I really look up to both of you and always find additions that you gents make stimulating. Thanks! One of the amazing parts of all of these patent banjos is that few ideas stuck. As you both point out the best part is to try and find the why. I find brackets keep the banjo from slipping when I play. But I could see the advantage in smoothing the rim out.

You are right, Dan'l, that an internal push-up tensioning system allows for a smooth rim without the complexity of the inside the rim pull-down systems such as Brown's. But that alternative was indeed in play at the time, as evidenced by patents by F.W. Harliss (1865), W.B. Tilton (1866), G. Mein (1866), George Dobson and William McDonnell (1869), and J.B. Howe (1881). The most successful of these was Tilton's. See pictures I just uploaded of Tilton's 1866 patent drawing, a view of one of his banjos from the back, and an 1874 model/price list. When I say "most successful" I mean in terms of number of extant instruments known and the length of Tilton's career; owning one of these and having played a couple others, I think their sound quality stinks.

Rob, thanks for bringing up Minnie Dobson. She had a patent in 1884 (see the patent drawing I just posted) which shows a pull-down system of tensioning with the bracket hooks outside the rim, but the more "dangerous" nuts and exposed threaded ends of the bracket hooks located inside of a bulge in the metal rim. The smooth and rounded bulge would be what rests on the clothing of the player. The text of the patent application states that "the head-holding hooks are prevented from engaging and tearing the clothes of the person playing the instrument." Actually, her design seems to be an elegant solution to the problem. I don't believe I have seen an extant example of a Minnie Dobson banjo, but I have seen English banjos with the same design feature. Although I have known about her patent, I did not know that notice of it was taken by Scientific American. Do you have a link for that material, or a digital copy that you could share?

Bob--Just google the magic words minnie dobson, banjo, and scientific american and it will appear before your eyes.  There's a nice engraving of the banjo too.  Do you know if Minnie was married to one of the brothers, and, if so, which?  I've never been able to figure this out.--Rob

Ignoring Dan'l's smartarse response, I can tell you, Rob, that, based on research I did about two years ago for an entry I was writing on the Dobsons for the revised online edition of the Grove Dictionary of American Music, I discovered that Minnie was the wife of Charles Edgar Dobson. And thank you for the info on how to get to the Scientific American reference.

Yes, Bob is correct.  She was married to Charlie Dobson.  Her name was Minnie Wallace, part of and act titled the "Wallace Sisters."