Does anyone know of any minstrel instructor books written in c notation?

Hi Mara--when you say C notation, do you mean music where the notated pitch assumes that you are tuned

But Tim Twiss will know for sure!

I have heard that some of the old gourd banjos were tuned down in C, but I have never seen any notation written in C.  Virtually everything that I have encountered was in either in keys of G/D or A/E.  G/D are common keys for most of the "folk" instruments of the time including tin whistle and dulcimer.  They are also easy keys for fiddle or guitar.  Is there a specific instrument you had in mind?

Hey! Thanks for your input.

I might have phrased the question awkwardly. I just began learning to read, but am working from classic style english instructor books which use gCGBD tuning. Relationally everything is the same of course but for the moment its very difficult for me to make the switches when reading the american minstrel books where the notes on the instrument are in different places. (And I am avoiding using tab).

So anyhow, I was curious to know if any of the American minstrel instructors are written for gCGBD tuning so that I could keep working on minstrel material.

Rob MacKillop's excellent book has a lot of Buckley, Bauer, Converse etc, and is published as you describe.

(as it would sound on a gCGBD banjo.)

on the accompanying CD, he is tuned lower (eAEG#B), which must confuse clawhammer players who try playing along.

He is a really prolific and versatile musician, but doesn't use stroke technique (he actually kind of argues against it, in a polite way) all guitar style, even on tunes that we would def play stroke on. But that doesn't hurt the book.

It's also good book to have if you want to play these tunes on modern banjo with a fiddle/mandolin player reading along.

Oh cool. He seems to be very involved across styles. I will check that book out. Thanks for the tip Jared!

I struggle with the same problem; I was starting to get comfortable with reading standard notation for the "Rice" eAEG#B tuning (used by pretty much all of the tutors starting with Rice in 1858, up through the Converse Analytical in 1886 and even others into the classic era) when I began dabbling with classic style, and now with a foot planted in each camp I find it hard to go back and forth.

When I start working on a tune I'll often put it into some notation software (such as MuseScore or NoteFlight) so I can export a MIDI file that I can play at variable speed; there are various tools out there for slowing down MP3 files but past a certain point the sound gets choppy.  A nice side effect of this is that most notation software makes transposition trivial, so you can enter the original 'A' notation, export a MIDI in Briggs tuning, and export a copy of the notation in 'C' if you want.  My current tool of choice is Frescobaldi, which uses Lilypond markup - I was just fooling around with 'Lor Bres De Ladies' from the Buckley 1868 tutor this morning.  Here it is in 'C' (minus the grace notes/slurs/etc.) 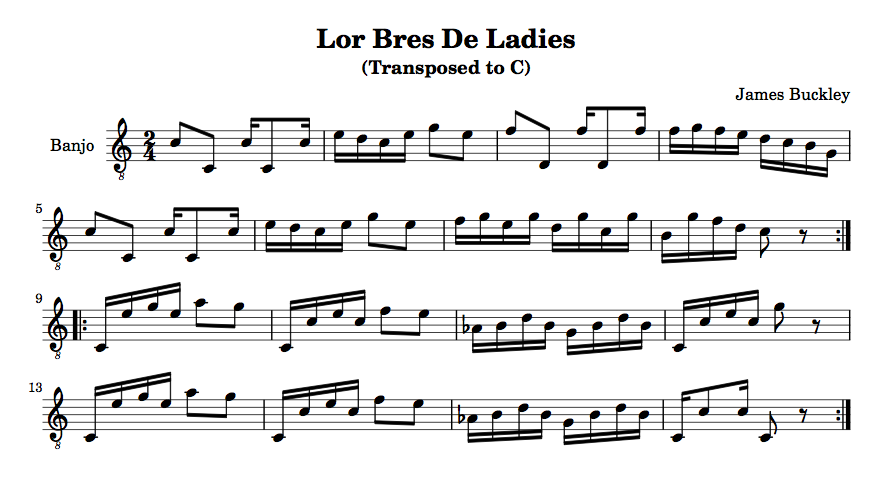 Permalink Reply by Leonidas (Lee) Jones on June 25, 2015 at 3:18pm
Joe Weidlich's Early Banjo, Technique and Repertoire has some selections from several of the tutors in C notation, if you are referring to music ala modern banjo tuning.

Often times when discussion systems of notation we will use the term "tuning" and that can be confusing.  "Tuning" in the folk banjo (mostly) refers to scordatura.

"C notation" also called "Universal" notation became standard in the US only after 1908 (but A was still being printed).

The "C" is the fourth string-- the rest following "Standard" intervals.  I quote because since bluegrass the standard has become what used to be called "bass elevated."

Finding the whys is easy and I'd just be repeating myself from the countless times I've posted the same explanation.  But that explanation is not for Mara as she asked a very specific and clear question.

A notation is the standard for what we call the "minstrel banjo era."  C notation begins to be printed in England in the 1880s and that is just after what we think of as the minstrel era-- becoming classic.

Most of the music published in England early on (1880s-1890s) is just American published music "transposed" (plagiarized) to C.

There are were some folios published that have short pieces that are sort of like the early repertoire.

Go here and look at "Turner's 60 breakdown's etc."  It has some fun stuff.  Also dig through the Ellis stuff, there are some gems there.

Most of the C notation instruction books have short pieces in the beginning that are straight out of the "minstrel" tutors, but you will need to go through them.

I read both A and C now.  I started with A as that was the music that I was interested in.  As I transitioned into more Classic banjo I learned to read C.  It is not hard.

I'm happy to find the Turner's tutor--  especially to know that there are shorter pieces written for classic style. I've been bewildered that Sunflower Dance is as apparently as easy as it gets- and frustrated not to find a Briggs equivalent with shorter tunes.

I prefer C for the moment because I am already used to thinking of the banjo in C/G. It wouldn't be too much effort to make the switch-- but on the classic-style ning forum, it seems like most people (or at least the most active posters) seem to be working from the British tradition in C notation, and its their guidance I receive. For now I'm not focused so much on the composers, but just love the repertoire, technique and the forum's help!

And thanks Andy also, I'd never heard of that software!