So, some of you fine folks may have noticed the photos that I just posted.  Yeah, I said "holy crap!" too.

There are more to come in the future.

They are very high quality and can be zoomed in quite a bit... lots of detail.

Now, these guys were the top players, they were superstars.  I can't help but notice their banjos, I like to see what the pros play.

Where are the large "scroll heads?"  The banjos that they are holding are not what most of us think of when we talk "minstrel banjo."  Many have lots of hooks.

Discuss, and I'll Join in. 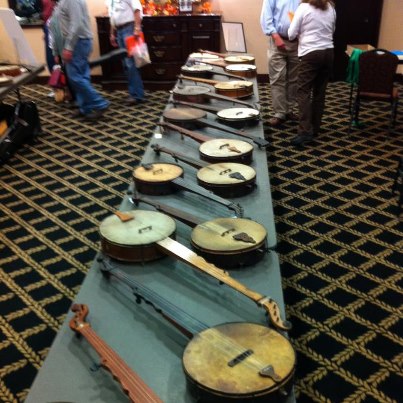 As I found out at this years banjo collectors gathering, there is even diversity among our known factory Boucher's. Some of these have square peg-heads, fret lines etc.

I would opine that since most of the banjos in your pictures are 1860's and 70's, scroll headstocks were on the way out and hooks were on the increase.  It would be nice to see Hy Rumsey's banjo.  Seeing Sam Devere's banjo is a treat.  Dan Bryant was by his own admission "not cut out to be a banjo player."

So, this is John Snodgrass.  The photo was dated May 3, 1865.  Unless the banjo was designed, developed, parts made, then cut and assembled four months before the date was written, this banjo qualifies as pre 65.  Besides, why 1865?  The minstrel show really got big after the war.  Post war the New York Clipper devoted a section of the newspaper to it.

Snodgrass, (see Converse "green") was one of Converse's circle.  The banjo he is holding is what is called a "Troy" or "New York School" banjo.  This pattern of banjo was improved in 1855 (yes 55) when Wilson, of Troy, NY designed the "Silver Rim" banjo.  Those are today called "spun over."

Look close at the heel.  There is a big bolt holding the neck on.  These banjos did not have a dowel rod, thus did not last long.

Now look at the banjo converse is holding.  The heel looks to taper, without a bolt.  His was likely built by Jim Clarke of NYC.  Clarke built the Troy design, but with a dowel rod until he died in 1880.  He made small numbers of banjos for pros only.

Buckbee banjos were cheap copies of these.  Think going to Guitar Center and buying a cheap Chinese copy of a famous electrical guitar. 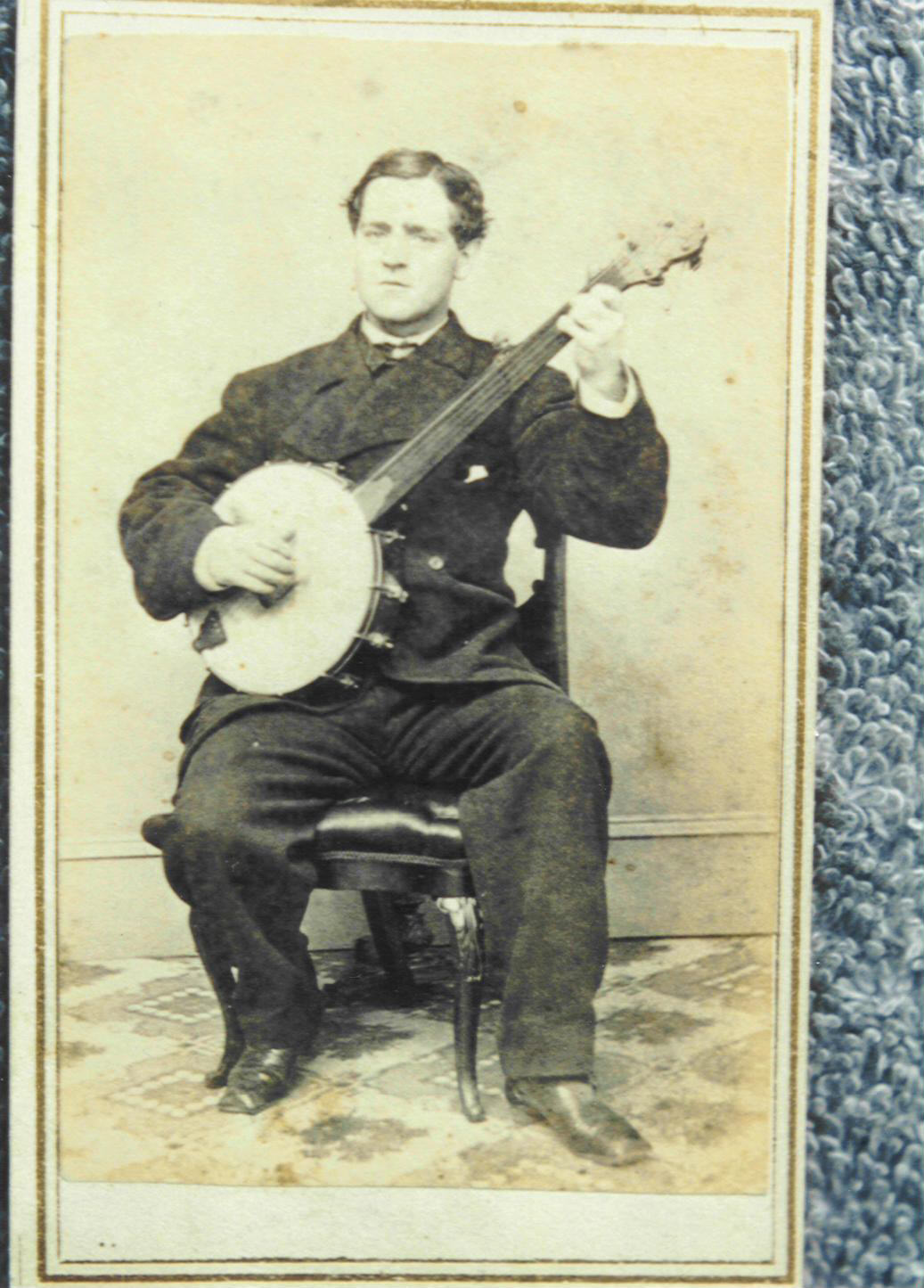 This photo if from the collection ofBill Michal

You're making me want a banjo with a rim and hooks!  Not that I don't love my kit-made tack-head, jsut gettin itchy for another!  Why oh why can't there be "Minstrel Banjo Center" (containing the great American makers, of course, no China mades ;))?

Thanks for posting the photo Joel!  I'll add my "Holy Crap!".  The do make you think more on the banjos being reproduced.  I chose not to go for a Boucher neck-stock as it seems there are more of them than any other.  I wanted a Sweeney at first, then had the opportunity to change it (won't say why Terry :)) and did to a simple squared off peg head.  I'm happy I did!

Im regards to the style the banjo rock stars have in these shots, I had a pssing thought about "old faithful"; havin gthat one banjo they'd go to out of all of them to get a tune just right or they knew would be perfect feel in their hands every time.  In recent history we saw Peter Frampton reunited with his 1954 Les Paul which was lost in 1980.  So, why not apply a similar fram of mind banjos? - Banjo made in 18(insert year), used through player's life.  Maybe a brass finger board was added to add new life to it, maybe frets?, maybe more hooks? or a new way for the tailpiece to hook on because it was dropped and broke?  Tack-head converted into rimmed? I can't help but think these aren't out of the realm of possiblity, thus not always making dating easy, unless it was, indeed a style of banjo shown in a photo or in real life that matched all the specs for a particular maker - as Joel points out about Snodgrass's.

The photogrpahic process can also help in dating, but not always:  Ambrotype (on glass) mostly pre-Civil War.  Tintypes - LONGER history of use, but peaters-out end of 19th century.  Cabinet Cards - ALWAYS post-Civil War as we see many of the images have been.  Knowledge of when the photographer, if noted on or with the image, practiced his craft.

....The photo was dated May 3, 1865.  Unless the banjo was designed, developed, parts made, then cut and assembled four months before the date was written, this banjo qualifies as pre 65.  Besides, why 1865?  The minstrel show really got big after the war.  Post war the New York Clipper devoted a section of the newspaper to it.

Why 1865?- just guessing there is a cut off date at some point for our purposes- is there in fact a cut off date for 'early banjo/minstrel era ?  I mean, if we are including the time period for all minstrel shows, then why exclude post 1900 minstrel shows for that matter?  Or even on early TV variety shows and motion pictures?  Then we'd really open up the styles of banjo used in minstrel shows.   :)