There was a brief discussion about female minstrel players back in 2011:
http://minstrelbanjo.ning.com/forum/topics/female-minstrel-players?...

but the thrust of the discussion was on names for banjos.  Female minstrel players have been a subject of interest to me for a couple of years.

I thought I would share the things I have been able to find so far, hoping everyone else might have more to add

Clearer image of their poster
http://www.birmingham.gov.uk/cs/Satellite?c=Page&childpagename=...

Different version of their image
http://www.fotolibra.com/gallery/932803/advertisement-for-the-ameri...

There seems to be a published collection of the Female American Serenaders' music, but it is unavailable

Buffalo Gals  (scroll down to p 6)

I knew there would be an occasion to re-post this cartoon from Punch.  I apologize if it offends anyone.   But it's Victorian humor about women, banjos, low-class entertainment, blackface--sort of equal opportunity lampooning.  The caption reads:

"BLACK SYRENS - This is how the lovely and accomplished Miss B__ns [of __, Portland Place] managed to defray the expenses of their Sea-side Trip, this Autumn, without anybody being any the wiser!" 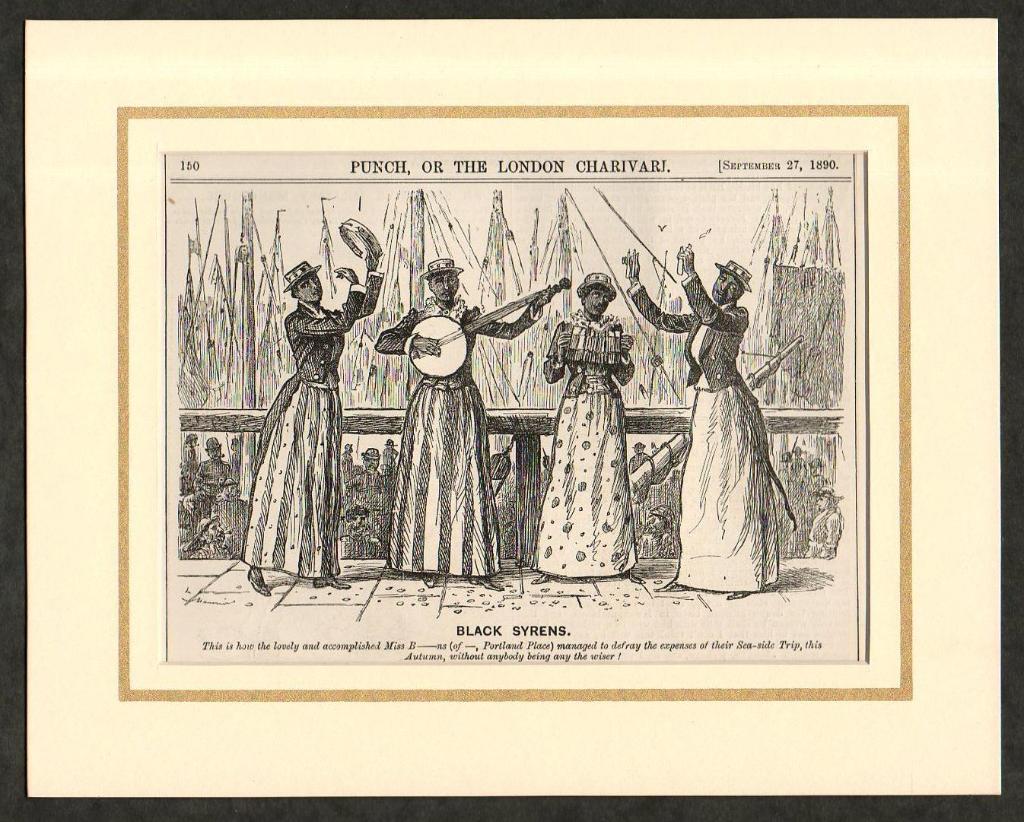 During the earlier discussion, I spent a fair amount of time searching for evidence of female minstrels during the antebellum period.   There were, in fact, female banjo players in the 1850s-1860s period--the most famous being Lotta Crabtree who learned the art, at least in part, from the minstrel Joe Taylor during her youth in California.   And if you don't know who Joe Taylor is, I heartily recommend his book "Joe Taylor, Barnstormer:  His Travels, Troubles and Triumphs During Fifty Years in Footlight Flashes" (1913; reprinted recently in paperback).   It's one of the best descriptions of the scuffling life of a small-time minstrel banjoist.

As for actual female minstrels:  I think there were few if any during the classic period of minstrelsy before 1860.  At least I haven't run into any, apart from the alleged Female American Serenaders in Britain.  My strong hunch is that the latter were men in women's dress, much like the "wench dancers" who were part of nearly every minstrel performance during the early period.  And for the record, I hope that that  part of early minstrelsy isn't recreated by modern reenactors!

My research is in agreement with what Bob has posted.  While I've found references to female banjo players, I've only come across a single reference about a female minstrel.  It was from a review of a performance by Buckley's Serenaders if I recall correctly, and the woman's act seems to have been more of a gimmick than anything else.  She reportedly came out on stage in blackface, which horrified the crowd and the reviewer, who thought the show had become too "grotesque".  She was only on stage briefly and the rest of the performance was more agreeable with the reviewer.

A thought I had while reading this thread concerned the popularity of male impersonators of women.  These minstrels were some of the highest paid and most popular performers, especially after the Civil War.  Maybe their popularity explains the lack of demand for female minstrels?

I too suspect that mostly men were playing the parts of ladies in minstrel shows.  But I'm no researcher.  The links Wes gave here - at least one mentions that they were perhaps actually men.  John- did you get the impression from that review that the audience was 'horrified' simply due to the fact that she was a real woman, or because it was a woman wearing blackface makeup to appear as a black person?  Or one aspect more than the other?  Can you quote that review here?

I'd need to find it again.  I read it a long time ago, and in retrospect I should have saved a copy when I did.  I couldn't what aspect of the performance made it so unpopular, but if I were to take an educated guess I'd say it would have been both the facts you mentioned.  Given the time period, I imagine it would have been pretty radical and inappropriate for a woman to appear on stage with a minstrel troupe, and the fact that she was blacked up probably made it even more inappropriate.

In Blacking Up: The Minstrel Show In 19th Century America by  Robert Toll, there is a section that talks about minstrels doing impressions of women in the late minstrel era.  You might be interested in it, especially since it was apparently a popular with women.  Many of these performers had perfected female singing voices, wore the latest fashions of the day, and had the demeanor and behavior a proper lady was expected to have.  Audiences raved that the best performers were so ladylike that they couldn't tell they were men, and these top performers were also well known for their singing ability.

Many of these performers had perfected female singing voices, wore the latest fashions of the day, and had the demeanor and behavior a proper lady was expected to have.  Audiences raved that the best performers were so ladylike that they couldn't tell they were men, and these top performers were also well known for their singing ability.