EXHIBIT: Making Music: The Banjo in Baltimore in Beyond

What follows is the press release from the Baltimore Museum of Industry covering the exhibit I am guest co-curating with Bob Winans and Pete Ross. It will be running from April 1st through October 18th.

If you are going to be in Baltimore, I hope you'll make time to visit the exhibit.

Director of Marketing and Events

Making Music: The Banjo in Baltimore and Beyond

BALTIMORE, MARYLAND – The Baltimore Museum of Industry (BMI) will present a new exhibition on the history of the banjo in Baltimore.  Opening April 1, the temporary exhibit, titled “Making Music: The Banjo in Baltimore and Beyond”, features banjos, sheet music, profiles of local banjo makers, and explores how our city was instrumental in the history of American banjo music.

For nearly 300 years the banjo has been a part of the American narrative, with the city of Baltimore playing an integral role in its legacy, from the manufacture of instruments to being the birthplace of some of the most highly regarded banjo players in history.

The largest concentration of banjo sightings in North America between the 1730s and 1830s was in the Chesapeake region of Maryland.  As the northernmost point for the southern economy and the south’s most industrialized city, 19th century Baltimore was the crossroads for slavery and industry and became the site of the banjo’s earliest mass production.

William E. Boucher, Jr., an immigrant from present-day Germany, capitalized on the demand for banjos and in the 1840s began a successful business manufacturing them and running a music store. Mr. Boucher and the city of Baltimore helped to transform the banjo into an icon of one of America’s first pop music crazes, leading to its enduring presence in the hands of everyday Americans.

“The banjo is quintessentially American, and has a long and proud history,” says BMI executive director Roland Woodward.  “This exhibit explores many facets of the banjo’s legacy, and provides important historical perspective on the instrument in Baltimore and elsewhere.”  From its beginning, the banjo, an instrument that was originally born during slavery, has through time been burdened with stereotypes, from its 19th century association with African-Americans to its 20th century connection with rural white southerners.

Today, Maryland continues to be a hub of banjo talent, from two-time Grammy winner Cathy Fink to Buddy Wachter, widely acknowledged as one of the most virtuosic banjoists performing today.  Stephen Wade is a local author, historian and musician whose performance of Banjo Dancing had a record-setting ten-year run at the Arena Theatre in Washington D.C.

This exhibit is made possible in part by support from the Maryland Humanities Council and the Maryland Arts Council.

Baltimore Museum of Industry: Founded in 1977 as a project of the Mayor’s Office, the Baltimore Museum of Industry is a private, nonprofit organization established to celebrate the past, present and future innovations of Maryland industry and its people through dynamic educational experiences. The Museum is a leader in innovative education about Maryland industry and a major attraction for Baltimore, Maryland, and the Mid-Atlantic region. Hours are Tuesday – Sunday 10 a.m. - 4 p.m., and closed Mondays.   The Museum is located at 1415 Key Highway, Inner Harbor South, Baltimore.  Parking is FREE.

Sounds great Greg!  Good luck with it.  I'd love to see it.

Good work Greg, I'm looking forward to seeing it. I was telling a history professor I know about this the other day and he said this  would fit right in to a course he is teaching this semester, I'm going to send him this, they may take a field trip  to Baltimore.

For those who are following our exhibit in Baltimore, which opens next week April 1st being the "soft opening" and April 2nd being the curators' opening event, Bob Winans, Pete Ross, and I were recently featured in a WYPR radio story about the banjo and the exhibit.

Talk to you all soon,

Wish I could be there on Wednesday, but I hope to be down the next weekend.

By hook or by crook, I hope to see this exhibit between now and October!

I caught the end. I'll have to go back and hear it. If someone puts up a link to a replay, it would be appreciated.

I caught the end. I'll have to go back and hear it. If someone puts up a link to a replay, it would be appreciated.

I went down this afternoon and really enjoyed the exhibit, Hats off to Greg Adams, Bob Winans, and Pete Ross! 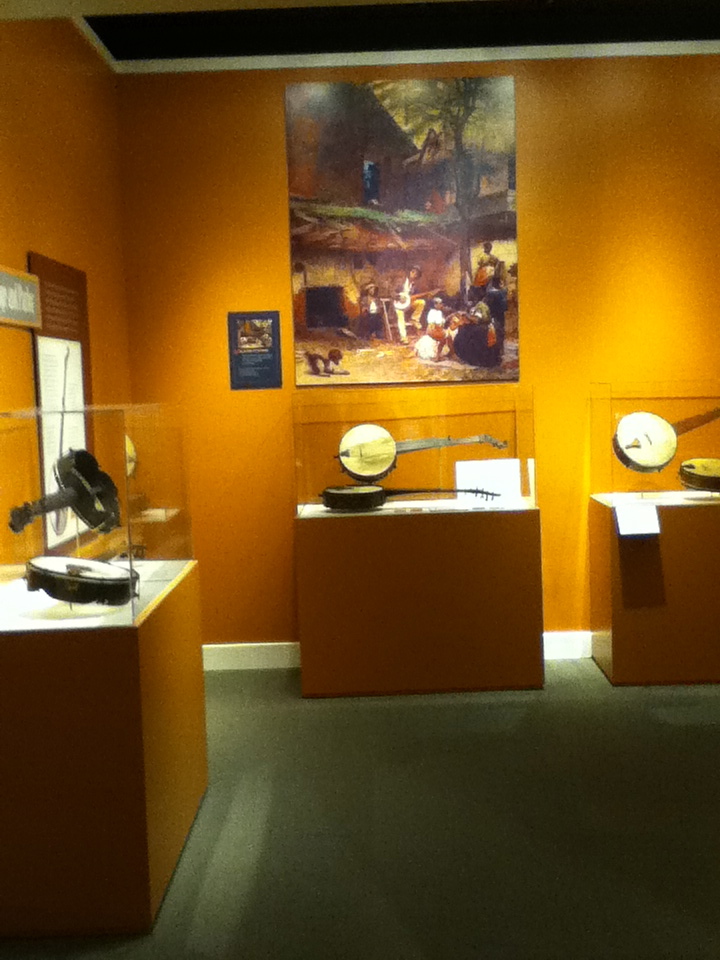 We were there about that time, but did all the exhibits so it was probably one when we got to the banjos.   I ran into some old friends from the Baltimore Folk Music Society who were there with some friends of theirs from Phila.