Marc Smith kindly sent me some more music to scan and much to my delight included this book.

E. M. Hall was a true Minstrel Banjoist.  He got his start after the ACW where he served as a musician (but not likely a banjo player). After the war he worked as a barber but had big dreams of fame so he quit his job and ran off to play banjo. As a banjoist he was quite successful and was called "the Paganini of the banjo."  He played "large size" banjos, 13" rims and 21" necks and he was known for his famous Clarke banjo "The Thunderer."

He settled in Chicago where he ran a studio and sold banjos under his name by various manufacturers.  His name turns up on Gatcomb and Schall banjos to name a couple. 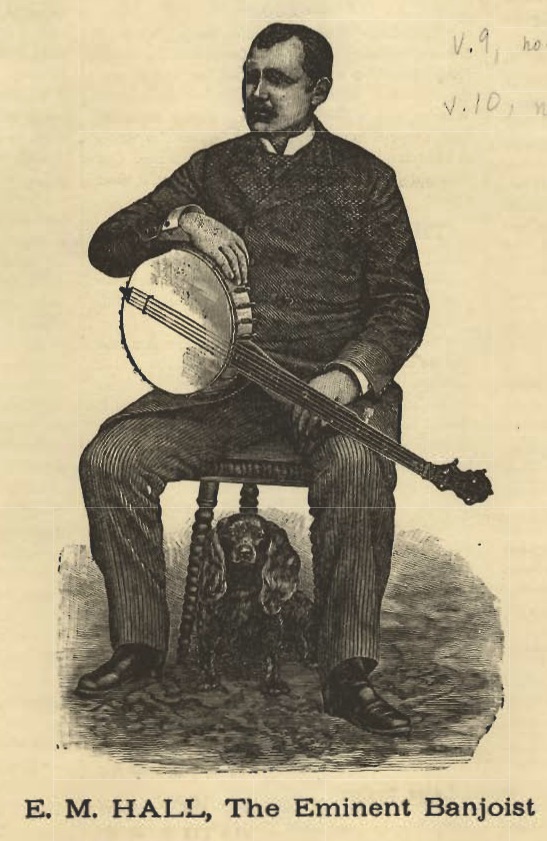 He often put on a "history of the banjo" show where he would start with a three string gourd banjo and work his way through to the "modern" banjo playing examples of popular music from each era.

As a Stage Minstrel Banjoist he played both finger style and "banjo" style.  In the banjo style he, like most stroke style players, used a thimble on his first finger.

His instruction book explains both styles but it is clearly a collection of music more than a teaching method.  It includes lots of interesting "minor jigs."

He died, along with 600 other people in the horrible Iroquois Theater fire on December 30, 1903.

I hope you find this useful-- another book now available by a real Minstrel Banjoist (after all that is the theme of this group).

Here is the link https://archive.org/details/EMHallBanjoMethod

I am not really a historian of any kind so I'm just trippin out on how relatively little money $1 is now vs what it must've been back then.

Thanks for sharing this, Marc and Joel!

Being a native New Englander and loving those minor tunes, I zeroed in on Bangor Jig. (p. 50) There are some curious/awkward timing things going on there, plus an impossible long slow 4th string glissando from D up an octave and a half to the G you'd usually play on the 1st string, 7th fret position.  Maybe you're supposed to slide slowly up the 4th string then leap across to the 1st to hit that note (or play it on a banjo with a reaaaaaally long neck?)

It's always interesting to look at old arrangements and wonder whether stuff like that was really intended, or if it was somebody's best attempt transcription that never got proofread, or what.  A more recent example would be the terrible Led Zeppelin guitar tab book I had as a teenager;  All of the arrangements were for standard EADGBD tuning, and a lot of them were exceedingly difficult to play and didn't sound right at all.  I thought I was doing something wrong until years later when I learned that those songs were originally written in entirely different tunings!

Anyway, I look forward to checking some of the other tunes out.  These transitional-era books are really interesting.

Ah!  I was hoping that someone would bring that one up.  I was prepared for it. (Hi Andy!)

Here it is "transposed" to "C" by George Lansing (would have known E. M. Hall and most likely heard him play this). 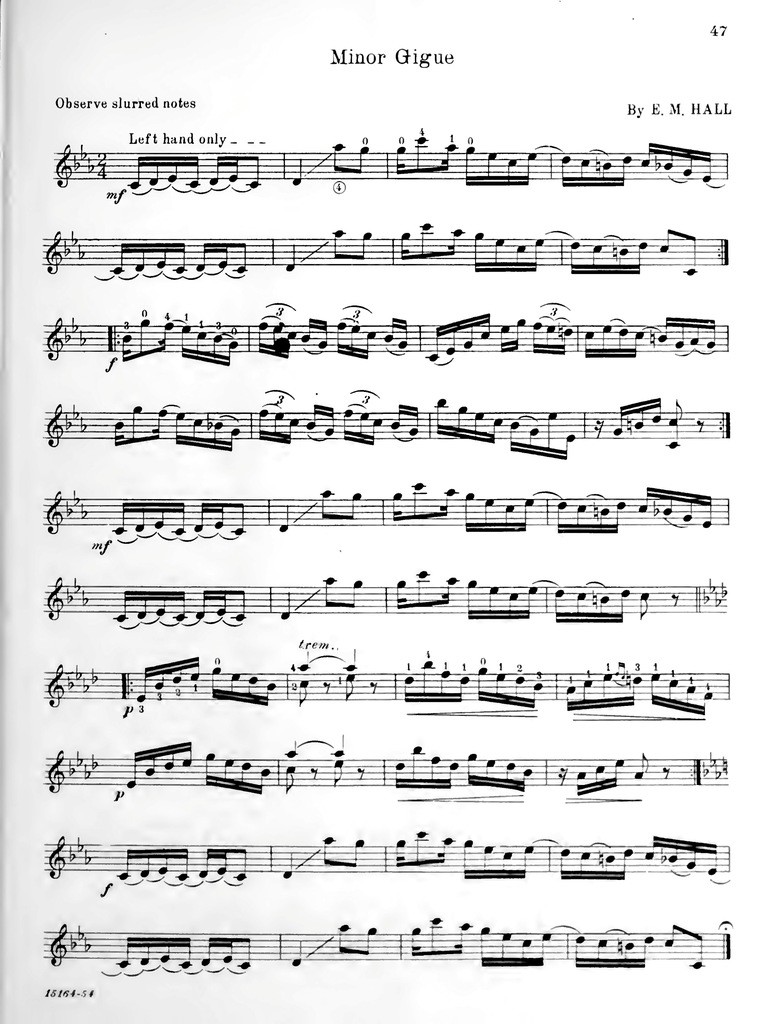 Notice that he has dropped the dotted rhythm and plays the sixteenth notes straight. He also clean up the rhythm to read easier.  This is from Lansing's "Excelsior Method" of 1918 found here...

Lansing gives no other explanation on how to play the piece but one thing is certain-- the slide was intended.

Start at the 2nd fret on the forth string and end on the 23rd.  Keep in mind that Hall played a 21" neck banjo.

The three octave neck (22 frets) is a interesting puzzle in itself and I have my theory about it.  Early banjos were capable of playing three plus octaves (reference the foldout in the Converse 65 green book) and into the 1890s Stewart would sell you a smooth fingerboard banjo with a 20/21" neck but considered them only for "Experienced players or for stroke style." (hence my thoughts that this book is more a collection).

Raised Fret banjos for some reason only had 17-19 frets.  Until the mid 1890s when suddenly they started having 22.

My theory is that a manufacturer would have a responsibility to sell goods to the general public that work.  Gut strings were notoriously untrue (meaning varied in thickness).  Using a false string on a smooth arm banjo was not a problem but with raised frets they will always play out of tune when stopped on frets.  This becomes more prevalent above the 12th fret.

An example to prove this is something I noticed hanging out with Dr. Bob Winans (and I hope he can chime in). He was using fishing line on his WL and had to slant his bridge dramatically because his banjo would not intonate correctly in the upper register.  As soon as he tossed the fishing line for strings extrude for musical instruments that problem went away.  The fishing line was "false."

In the 1890s machines got better for the manufacture of gut stings and a mechanical truing process became common (like rectified strings today).  Thus, a maker of banjos could ship three octave raised fret necks without getting complaints from customers.

I have played around with this piece in the past but I've never really given it a go.  Perhaps it is time to work it up.

Hmmmm. I'm reading the A-notation slide as a note from D to F. That would be from the 5th fret to the 20th (on the 4th string). The Lansing version (C notation) looks to have been radically changed to be a D to A (2nd to 21st). For the most part, I read these things as "effects" and thus not really necessary to hit both ends exactly...they want a big, slippery slide that looks and sounds cool.

I'll input them both into TablEdit tonight and post some comparative MIDI examples to listen to.

Thanks for scanning and putting it out there, Joel. This stuff begs to be played again!

Permalink Reply by Joel Hooks on July 27, 2015 at 2:01pm
I played with it a little more last night, but I'm kinda on a later era kick right now. This one is a little awkward on the B part. I think it qualifies for the longest slide award.

I've just been playing with the Lansing version and I think I like it!

The first part of this piece lends itself nicely to this sort of thing (as does the long slide). 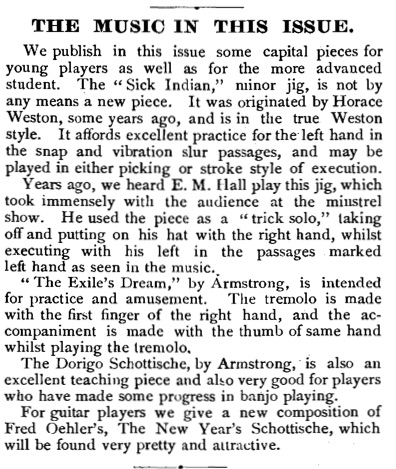 Here's both versions, "Bangor Jig" in Am and "Minor Gigue" in Cm. I used the "piano" voice as the "banjo" voice is grating on the nerves.

I agree that "Minor Gigue" is better. The transitions are better...but I like the dotted rhythm of "Bangor Jig".