I've been watching several tutorials about Clawhammer since Mark Weems mentioned this. One thing is the concept of "down". Down in the right hand motion can be directed straight toward the head of the instrument. it can also be interpreted as aiming toward the floor. How do you all interpret this?

Just re-read that. Yes, you can appreciate the efforts to keep thimble playing at a high level. If you play some of the material in Converse's Analytical, you can see where it was taken. But not only that......the beauty is seeing the congruent connection of the earliest type stroke tunes - many renamed, but none the less Converse applied the scientific technique to all the song types of material found in print from the 1850's and 60's. The angle at which the thimble wore out ( a smoking gun ) shows that the angle was oblique in that it related to the plane of the strings and the fingerboard and not so much the "down" angle towards the head. Most images support this anyway.

This discussion of thimble playing here is interesting, particulaly the suggestion of using the side of the thimble nearer the thumb.  Tim? 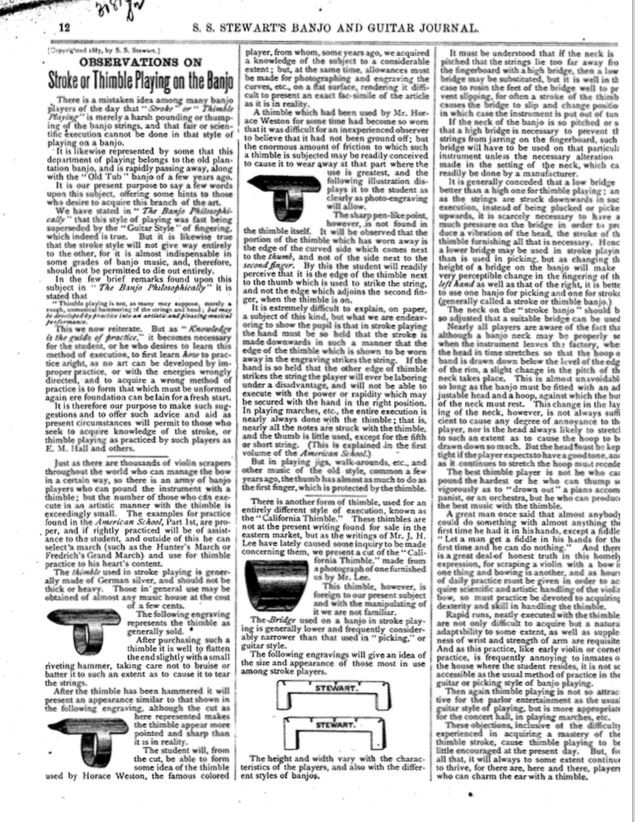 Permalink Reply by Wes Merchant on January 11, 2016 at 8:31am
The other point that I found interesting was Stewart's comment on the use of the thumb in the playing of the 1880s versus the earlier style.

LOL, I wish I still had a banjo with a clear head on it. Here's a cool demo from Zepp though. Shows this quite nicely, I think. His finger is moving straight at the head (close to straight, there is a little angularity to his attack) and yet his fingernail is not perpendicular to the strings...the wear point will not be along the nail (thimble) centerline.

Still difficult to discern. I am going to do a water based marker experiment tonight. Mark the string, play, and see where the marker in is on the nail.

I see oblique here, even on the second nail which is less than the first would be.

One can make a perfectly perpendicular strike and contact any point on the thimble you wish.

That sentence did not make sense. ( to me )

I think you are confusing two separate issues.

1) vector of the movement.

2) angle of the thimble.

The vector of the strike is the angle of the movement towards the banjo head, independent of the angle at which the thimble (finger) is held in relation to the string). I think that this is what is meant by cautioning players to avoid an oblique strike.

Angle of the thimble in relation to the string varies with the player. It almost has to be held obliquely (neither parallel nor perpendicular to the string).

It seems pretty clear to me...but I deal with 3D movement quite often. I certainly don't believe we operate in a perfect world. Technically, all of our movements are oblique to both the head and strings...we're just not capable of hitting that perfectly straight "non-oblique" vector, we actually move in curves and wiggles.

I have been trying to address those two issues.

The vector of the movement was the initial subject of the post, and the angle of the thimble came up after the Stewart posting.

Oblique ( to me ) was always part of of the angle of the thimble.

Although the vector of the movement may end up oblique, it seems that the mental visualization of the player is still to try and achieve an overall "down" movement.

It is Converse who talks about striking obliquely...and I don't recall him talking about thimble wear patterns. ;-)

Over the years, I've seen a number of players who force themselves into weird and cramped positions so that they 'fit' some mis-perception of playing instructions. I never really understood contortionism, playing should always be comfortable and relaxing.

And yes, I agree. 'mental visualization' of down vs 'absolute' down.

Briggs first mentions oblique. I realize Stewart did not say "oblique". I was tying together the result of what an oblique angle to the string may do ( Stewart's observations on thimble wear. ) That was what I was demonstrating with the marker on the string. It seems Briggs description results in a non-contorted and relaxed playing position.