Any idea what this is? 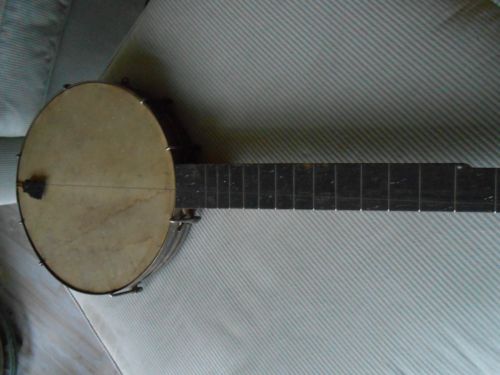 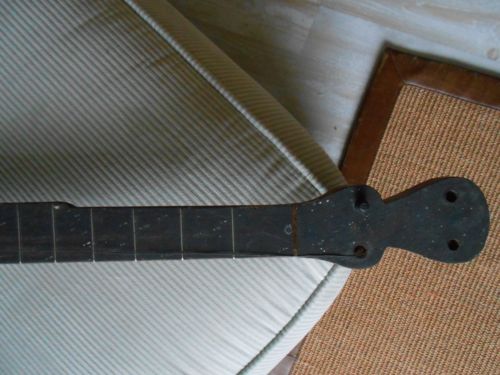 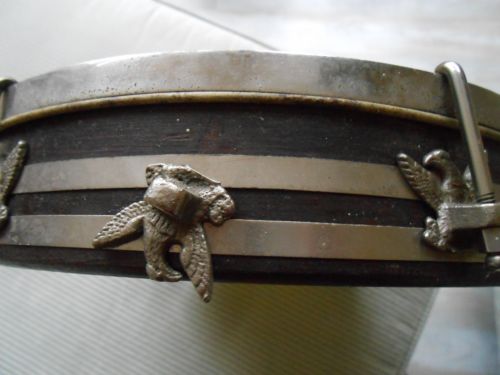 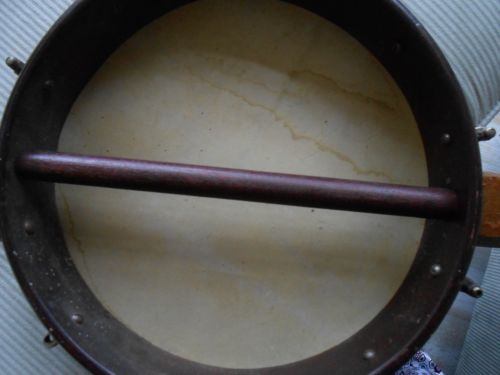 Factory made store stock banjo made by the Buckbee factory in NY.  Made by the thousands, these were inexpensive stock for music stores, pawn shops and general merchandisers.  Though they were not always priced low at the retail level.

This style continued to be listed in jobber catalogs well into the 1890s.

Buckbee produced the (now again) fad banjos that were claimed to be build by various members of the Dobson family.

Buckbee would stamp any name on a banjo (this would raise the selling price, esp if you last name was Dobson or Converse) and would do all kinds of special orders.

The vast majority of his production was unmarked cheap banjos like this one.  Think of them as the 19th century equivalent to the "bottle cap" banjo.

Rob Morrison knows quite a bit about them and can fill in what I left out.

Ah but Dan'l, did anyone say that 'cheap' is necessarily a bad thing?  Sometimes a cheap banjo can sound great (a Goodtime, or a Kay, or many old no-names), or perhaps be a good choice to take when traveling in poor conditions, or to lend to a friend for beginner learning purposes.   :)   When I hear of a 'cheap banjo' I first think in terms of it being affordable, rather than thinking it was necessarily crappy.

I have an 1880's Buckbee (though it has a rectangular peg head) that has a round dowel like this one. I've read some people say that this possibly makes it older, like late 1870's, but kind of hard to tell. It also appears that there are two screws that are going through the rim into the heel of the neck, which is a Buckbee trait. Mine is also like this.

I don't think I've seen a rim with the two bands around it before. The rim on mine is a spunover.

No, I totally intended cheap as poorly and inexpensively crafted.

Dan'l, have you ever had the chance to hold in your hands and compare one of these with a Stewart of the same 1880-90s vintage?

The difference in quality is every bit the same as putting a Enoch or Ramsey against a bottle cap banjo.

Swaim had every right to his claims of quality.  He built very nice banjos.

Hi Dan'l,  I have no experience with 1970s bottle cap banjos, so I can't speak about them.  But- Goodtime openbacks are still $400...which I do consider to be 'cheap' for a new banjo.- they sound nice and play smoothly.   Some old Kays are real nice basic banjos too, not crappy- and a good player can make them sound even better  ;)  .  And actually some of the very old plain spunover pot no-name old banjos I've heard have had absolutely wonderful bell-like tone and resonance...yet they were bought 'cheap' (less than $400) by my friends recently.  On the other hand, there are other 'cheap' banjos sold today for around the price of a Goodtime that Ive seen literally fall apart within months- one was a brand new Fender brand banjo about 10 years ago...truly a piece of crap.

I do agree that it's unfortunate that some banjos were/are judged to be either 'fine' or 'cheap' merely by the amount of inlays or brackets they have.

Yes, we all see the photos.  But that does not answer my question.

Dan'l, have you held examples of each style of banjo (Buckbee like above and SSS) in your hands and compared them?