From Slave Songs of the United States, 1867

Comment by Paul Draper on March 17, 2016 at 10:46am
The book ends with seven "French" songs (the last one being Musieu Bainjo) from "Good Hope" plantation, St. Charles Parish, Louisiana.

Here's the page of this tune: 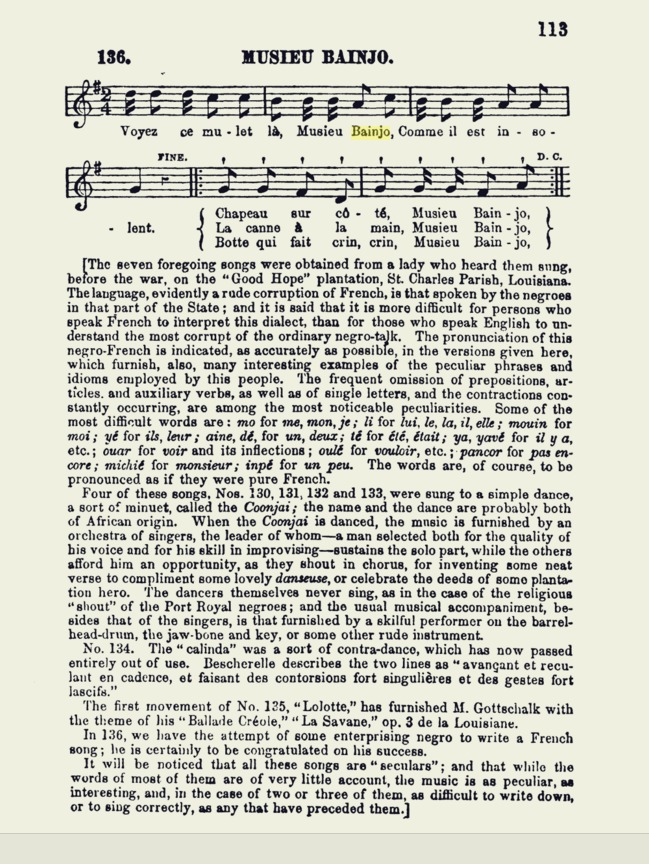 I like the note about the barrel-head drum and the jawbone as being typical accompaniments to the singers and the dancers.  Also, is this not the first time we see the instrument being called "Bainjo"?

The great importance of this book lies in the fact that it features music collected from and created by the slaves themselves, not music composed by or re-interpreted by white minstrel performers and songwriters imitating or parodying black slaves or so-called "Ethiopean" music.  I think I recall reading in this book that the intent of the author was to produce a second book featuring non-religious music played and sung by slaves...but this unfortunately never happened, so this first book contains mostly religious hymns and songs.  Someone correct me if I'm wrong about this..I read this book a while back.

But they are still transcriptions, which puts them against the same scrutiny.

Yes there is always an accuracy issue about any written transcriptions, but my point is they were collecting/transcribing songs from what they heard the black slaves singing/playing/dancing, much as the musicologist Sharp did a little over 100 years later when he transcribed/collected unaccompanied ballads in the southern Appalachias, accompanied by his assistant.  The person transcribing the songs in Slave Songs of the United States wasn't composing songs, or transcribing performances of white people's derogatory songs about black people or white people's ideas of what black slave songs would sound like... i.e. the whole "Ethiopean songs" that weren't Ethiopean songs by any stretch of the imagination thing.  Rather they were collecting songs and describing how they were played, sung, and danced.  That's why this particular book is particularly important.