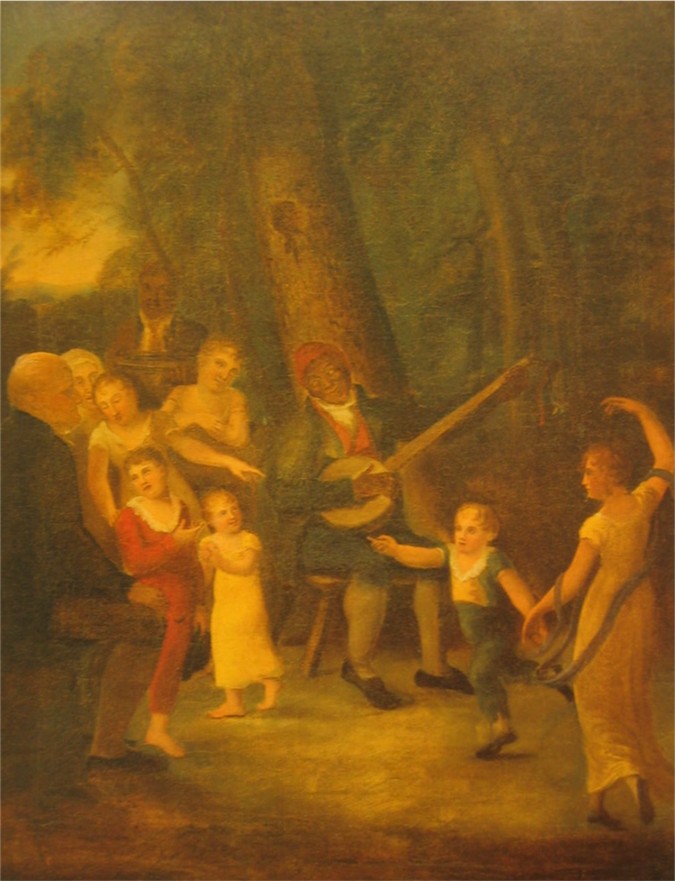 To me, the interesting thing about this painting is not whether it is a gourd or frame banjo, but that here we have a black musician playing a banjo for white gentry, who seem completely comfortable dancing to it, all 20 years before Sweeny starts his career. What music was being played upon that banjo? The Valentine Museum says that although this painting used to be labeled as 'Sy Gilliat', they have no evidence that it is indeed Sy. Sy Gilliat, (d. 1820), however, was one of the most popular musicians in the late Colonial and early American period. A body servant of Lord Botetourt, Governor of Virginia, he played both violin and banjo and was the semiofficial fiddler at state functions and balls in Williamsburg. After the Revolution, he was active in the Richmond area performing with his assistant, London Briggs, who played flute and clarinet. A typical set list played by Gilliat and Briggs would commence with a Minuet, and progressing through Country Dances, Congos, and Hornpipes, would conclude with an energetic Jig. ( Samuel, Mordecai’s Richmond in By-Gone Days, 1856.)

Hey Mark thanks for all the historical information, That just opened up new stuff to check out. Still making my way slowly through,"Dance and Its Music in America 1528-1789",Kate Van Winkle Keller. That last part about the set list is so in time with what I have just been reading about these dances and the musicians that were the players, yep most definitely slaves but very popular players at these functions. 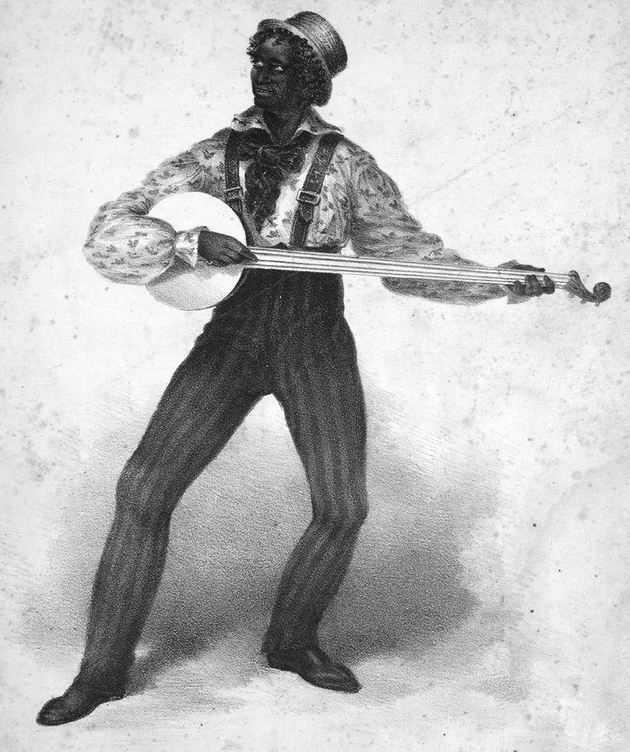 Mark and Dan'l and Nicholas,  Along these lines I recently found a February 1838 account in the Charleston Courier (South Carolina) written by an Englishman who signed himself "Mr. Pickwick."  He visited a plantation called Live Oak Grove at Christmas in 1837 about which he wrote (for his friends back in London, I think), in part:

"Family connections and neighbors are invited to dinner, perhaps a little eggnog is made in the morning, and a few healths drunk in the evening, but this grave people generally shun long and deep potations, and seldom even perpetrate a dance in the Christmas week--I mean the whites; the blacks keep it up by relays, dancing day and night, sometimes with the tamborine or fiddle, sometimes to their fantastic banjo, (of which, by the way, I shall endeavour to bring a drawing if I cannot obtain the instrument itself.)  Indeed, the chief Christmas amusement of the white people is to witness the pastimes of their slaves.  More merry, noisy scenes, I never saw.  I am taking lessons on one of their genuine banjo dances, which I will exhibit to the club on my return.  Their 'head man of the banjo' says, I learn very fast, and the ladies of the family are greatly amused with the proficiency I have made."

I think he's talking about learning a "banjo dance," rather than how to play the banjo.  But I could be wrong.  In any event, it's an interesting account, particularly his desire to get hold of a banjo.

It also reminds me of a story that the blues singer Big Bill Broonzy told (to author Studs Terkel) about playing fiddle at "two-way picnics" in his youth.  One side for the white folks, and one side for the black folks.

I've seen the paperwork for this painting on a visit to the Valentine Museum some years ago.  The provenance is not good.  If I remember correctly, a painting of Sy Gilliat was known through anecdote, from the early date.  The painting pictured here wasn't cataloged in any way until later in the 19th century.  Since reading this, the connection between anecdote and actual painting has always seemed tenuous to me.

I talked about this painting with Mark Weems in Antietam last weekend, and though he also seemed suspicious about the early date, he demurred when I asked him exactly why. We're waiting Mark...

So Pete....what do you think? Hoop or not, and how early?

The history books are often proved wrong, boys and girls, particularly in a  new area of study such as ours.  Joe Ayers has a book coming out really soon which may shed some light on such things.

Is the book out yet?